Nanci, Issie & family, My condolences on your loss. May your cherished memories be a comfort now; may they continue to be. May you know no more sorrows.

I only had the pleasure of meeting Millie once, but she left quite an impression on me. Her zest for life, her dazzling smile, she was high on life! Nanci would always fill us in on Millie's latest Halloween costume. She was so lucky to have had such a beautiful family. She will be missed.

So so sorry to hear this sad news. May her memory be for a blessing.

To Doreen, Sydney, and family… What a beautiful long life, and heartbreaking loss nonetheless. Thinking of you at this difficult time and praying that you are comforted by beautiful memories of happy times spent with your sister/sister in law. Sending much love, Maia

Condolences to the family. Millie was a long time friend of my MOM, Sylvia Robins. Hopefully their paths will cross again. Barry Robins

My heartfelt condolences to the Dolman Family .May all your beautiful memories of Millie be a treasure . So wonderful & special to read of Millies interests & accomplishments . Best regards MarilynRabinovitchMoskovic

77Milly was my last Montreal friend. We reconnected in Toronto. Both of us moved to be near our kids. Regret it seeing her more often.So long , Milly….see you soon. You were a special lady. Condolences to Nancy…sending hugs.

So sorry for your loss…a long life. Roslyn

Judy and I send warm supportive condolences to Nanci and Issie and family. Millie was always a very special woman and we know, despite the fact that she had a very full life, that she will be sorely missed by you and Elissa and Pedro and your grandchildren. Her memory will live on for all of us who had the pleasure of knowing her.

Sorry to hear the news. 100 is an amazing feat! Condolences to the family hoping you have wonderful memories of Millie.

Dear Nanci, Issie, Doreen and all who loved Millie On route to Toronto with a plan to visit Millie. Unfortunately we were too late. However we were blessed to have the opportunity to visit with her at Hazelton Place, several times, where she proudly presented me with a beautiful necklace that she created.. It has been awhile since our last visit due to Covid. Always so appreciative, that we made time to visit with her. Your memories of amazing Millie, will bring you tears and laughter after a long courageous life. May she rest in peace Much Love Miriam & Marty

Dear Nanci, Issie, Elisa, Pedro, Dani and Harry, Sending our deep condolences for the loss of Millie, an extraordinary woman whom we all loved. She was an amazing mother, mother-in-law, grandmother, great-grandmother, sister and aunt. Everyone connected to Millie and was loved by so many. She was wise with a real zest for life despite her many hardships. She always was forward looking, open to continued growth and development. She was so interested in all your close friends and we all felt it. Nanci, you were an amazing daughter so devoted and caring. Issie, you were a son for her. Elisa, Pedro and family your devotion to her was constant. We will all miss her but know that she lived a full meaningful life with the joys of family who all loved her dearly. We mourn with you, Love, Sharon and Mick

To have lived 100 years is a blessing.We were so excited that you celebrated that milestone,we didn’t expect your passing the next day.May the family be spared any further sorrow.

dear family, just so shocked after seeing all the wonderful pictures on face book .so sorry for the news .my deepest sympathies. your cousin Merle Leibovitch

Dear Doreen, So sorry to hear the news..but she had a wonderful long life!

Stan and I are deeply sorry for your loss. You were blessed to have Mlllie in your lives for so long. May her memory be a blessing to you all. 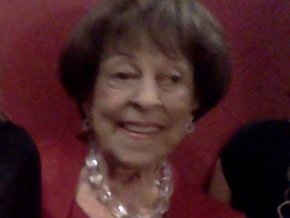 April 29, 1922, to April 30, 2022
The day after her 100th birthday. Beloved wife of Harry, R.C.A.F. Survived by her loving sister Doreen Miller (Sydney); her daughter Nanci (Issie Goldman); granddaughter Elisa (Pedro Simoes), great-grandchildren Dani and Harrison; adopted daughters Hana and Donna; and her adoring nieces and grandnieces and nephews, Janis, Susan, Jesse and Jayme Clapoff; Karyn, Ron, Noah, Daniel Miller-Medzon; Gary Miller, Susan Quig and Adam; and Penelope Quick.
Millie was born on Henri Julien Street in Montreal and educated in French at the Soeurs des Saints Noms de Jésus et Marie. She then worked in her second language at RCA Victor in the Glen, and later as an account manager at CAMA. She was a dedicated volunteer, serving as Vice President of the Canadian Muscular Dystrophy Association. At the age of eighty-one she relocated to Toronto where she took two years of psychology courses — which she loved. At Hazleton Place, she continued her volunteering, winning Volunteer of the Year awards several times… as well as The Best Halloween Costume! In her mid-80s Millie discovered her talent for art, becoming an accomplished painter, collage-creator, and jewelry designer (selling some of her jewelry with proceeds going to the Heart and Stroke Society). Millie was known for her beautiful smile, her sharp wit, her fabulous wardrobe, her Friday night cocktail parties…and the amount of time it took her every day to do her hair and put on her make-up just right (the only way she wanted to be seen!).

Above all Millie’s abiding passion was her family, including those who were able to be with her until the end, and the family members she lost too soon; her sister Eileen and brother-in-law Morris Clapoff, sons Melvin and Howard, granddaughter Tamara and nephew Jeffrey Clapoff.
Many thanks to the long-term care home staff at Kensington Gardens. Funeral service from Paperman & Sons, 3888 Jean-Talon West, on Monday, May 2nd at 1:00 p.m. Burial at the Beth Ora Congregation Section, Kehal Israel Cemetery, D.D.O.

Leave a condolence for Mildred Dolman