Dear Tobi, Marissa, and Josh, please accept our heartfelt condolences on the loss of your dear mother and bubbie. We have such wonderful memories of times together, and Aunt Peggy's constant gentleness, curiosity and kindness. What a lovely, wonderful woman. Thinking of you all, and Ruby, and sending all our love. May her memory be a blessing, Maxine, Michele & Tara

Dear Tobi and family, Your mom was truly a wonderful woman and I can also lay claim to calling her "Auntie Peggy" on my many visits to my aunts and cousins who lived on 94th. I have very fond childhood memories of both your mom and dad and always loved chatting with them whenever I was in from Ottawa. May your mom's memory always be a source of comfort and a blessing to all who knew her. Sending you lots of strength as you pass through these dark days, and may you know no future sorrow. Selina (Marilyn & Thelma's niece)

Dear Tobi, Marissa & Josh, May the memory of your mother and grandmother be with you forever. She was a wonderful lady that always greeted us with a smile and a laugh. She was warm and caring and always welcoming. We will all miss her. Lots of love, Janice , Marty and family

Dear Toni and family,my deepest condolences on the loss of your mom, she was a beautiful person inside and out. She was my “Auntie “Peggy. When my sister and I were younger , she came over to my house to take care of us when my mom needed help.I remember sleeping over at their house when my parents went on vacation.I always asked her for recipes especially her whipped potatoes.I will always cherish the wonderful memories I have with your mom. She will be forever missed. Rhonda and family

Tobi, Marisa and Josh, heartfelt condolences on the passing of dear Peggy. She will always be remembered as kind and loving. Her legacy will live on in your beautiful families.

Danny and Marti Stock - 18 days ago

Please accept our heartfelt condolences, we were very sorry to hear of your loss.

Michael and Gail Campbell - 18 days ago

Dear Tobi and family, our condolences on the passing of your mother. As others have mentioned below, your mom was known on 94th street simply as "Auntie Peggy" that reflected the love, affection and respect that all the kids growing up on the street had for her. May her memory be a blessing. Be well. Michael and Gail

Dear Tobi, please accept our heartfelt condolences for the passing of your dear mother. Our thoughts are with you at this very difficult time. Maryse and Henri Ouaknine.

Dear Tobi, Josh and families, I am so sorry to hear of Peggy's passing. She was such an amazingly wonderful neighbour on 94th Ave. We had so many laughs when we gathered on our lawns to have hours of conversation. My children and l have wonderful memories of a great woman. Rest in peace Peggy.

Dear Tobi, Marisa and Joshua my sincerest condolences on the passing of Auntie Peggy. She was such a cool lady and she loved you guys very much. I hold my memories of her and the house on 94th street close to my heart.

Dear Tobi, Marisa & Josh. I am so sorry for your loss. Peggy was such a huge part of our childhood and will always hold a very special place in my heart. May her memory be a blessing always.

I am so sorry to read the news of Peggy’s passing. She was wonderful woman who always welcomed me into her home. I have fond memories of her and extend by deepest condolences to the whole family.

Dear Terri, My Condolences to you on the sad loss of your Dear Aunt Peggy. Evelyn Warhaft

Dear Tobi and family, Our sincere condolances. We were sahSadenefn

Dear Tobi, and Family, Please accept my sincere condolences on the loss of your dear mom. She was such a friendly and very kind person. May all your beautiful memories sustain you through this difficult time. Yes. 94th Ave was one of the best streets in Chomedey One BIG HAPPY FAMILY and the best environments for kids to grow up in. Stay well Fondly, Thelma

Dear Tobi and family Ernest and i offer our condolences . May your good memories help during this sad time.

Tobi, my deepest condolences to you and your family. As one of the 94th street gang, she’ll always be Aunty Peggy.

Tobi, Marissa & Josh, I am so sorry for the loss of your mother & grandmother. Auntie Peggy was a wonderful person with a great personality and everyone’s “Auntie “ of 94th, the best street in Chomedey. She was always there with a hello &”How you doing” as we rode by on our bikes. Lots of free popsicles if you stopped! Mine and Nancy’s sincere condolences. Love,

Dear Tobi, Marisa & Josh, our deepest sympathies to Auntie Peggy. She was soo loved by all. The last of 94th street. She was soo proud of her beautiful family. She will always hold a special place in my heart . She was very special. ❤️❤️Brenda and family.

Dear Toby and family. I am so sorry for your loss. Even though your mom was not our real aunt she was “our Aunty Peggy “. I remember your late dad coming over to sell lotto tickets. 94 th Ave was the best street to grow up on. May you and your family be spared from any further sorrow.

I was so sad to hear of Aunty Peggy's passing. I have such vivid childhood memories of your mom and your dad. I remember her staying with us when our parents went on a trip. I think we aged her in that week. I can still remember her voice, laugh and caring ways. So many conversations with her on the way to my Aunty Marilyn's house. For all the kids on 94th, she was our Aunty Peggy. My condolenses to you and your family.

Tobi, Marisa, Josh, and families; My deepest condolences on this tremendous loss. I have a lifetime of fabulous memories of Peggy, including lots of laughter. R.I.P. Peggy. Leslie.

Tobi, I'm sorry to hear about your loss. I only met your mom many years ago in the Chomedey days. She left a very positive impression on me. My sincere condolences

Farewell from one of those neigbourhood kids of 94th Avenue. Condolences to the family. 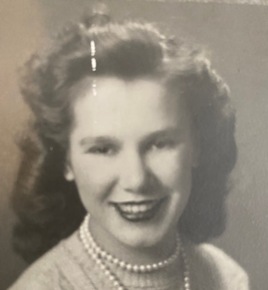 It is with great sadness we share news of Peggy's passing on Wednesday, January 4, 2022. Devoted mother of Tobi (Luc Bilodeau). Adoring grandmother of Marisa (Scott Mclver) and Joshua (Jordana Zabitsky). Proud Great-Bubbie of Archer, Avery and Ruby. We are profoundly
grateful to have had her in our lives for the many years gifted to us. Peggy was born Verna Ethel on July 26, 1927 in Eel River Crossing,
N.B. to Hattie Eve Burris and Alexander Robinson. Peggy learned what hardship was early on, losing her mother at the height of the depression. She left her hometown to join the war effort in Montreal, working in a munitions factory. Eventually fate lead her to waitress at Dinty Moore's restaurant and her mate, the late Reuben Goodman. Rube too, understood what hardship meant, losing both his parents at an early age, also during the depression. Peggy was the last surviving sister of 6 sisters, Myrtle (Clarence), Viola (Harry), Helen (Roger), Eileen (Robert) Pansy, and special cousin Helen (Thomas). Peggy was also the last surviving sister-in-law of David (Mary), Harry (Rose), Bernard (Mary), Gertrude (Irving), Harvey (Tamar). She was called Auntie by many nieces and nephews on both sides, as well as the neighbourhood kids on 94th Avenue. Peggy could always be counted on for compassion, commiseration, and fierce defence of those she loved. Funeral service from Paperman & Sons, 3888 Jean Talon St. W., on Monday, January 9 at 11:00 a.m.  Burial at the Last Post Fund National Field of Honour Cemetery, Pointe-Claire.