Doris and Joel Knafo - 17 days ago

My deepest sympathies on your loss. Very touched to read about her life. She left a beautiful legacy of so many family members.

Sending my heartfelt condolences on the loss of Hanka, an incredible woman. Love to you all. Marni Goldman xox

Dear Dr. Morris, Mila and Family - It moved me to tears to read through your mother's obituary. Although I never met with her, I can imagine what a strong, courageous, charming and loving person she must have been. Her strength and resilience shine through, and not all the difficulties could dent her will and character. I wish your family peace to endure this loss.

To the Goldberg family, So sorry for your loss. May her memory be for a blessing.

Carol and Ron Slater - 24 days ago

Dear Family, Reading Hanka's obituary truly brought tears to my eyes! What a life! we knew she was a "survivor" but never heard the stories behind her survival. She lived a life that was so heartbreakng in so many respects but her amazing resilience allowed her to continue, to contribute and to love her family and, indeed LIVE! May Hanka's memory be for a blessing and may the stories of her heroism inspire many generations of her family! With affection, Carol and Ron

Dear Harvey and the entire Goldberg family, My deepest sympathies on the loss of your dear mother. May her memory be for a blessing, and may you always have fond memories of her.

Reading the details of her life on this page make clear: she lived a remarkable life. She was special, as we could sense when you introduced us to her many years ago. Our heartfelt sympathies. Best wishes to all.

Please accept my heartfelt condolences on the loss of your dear Mother. We were backyard neighbours, growing up on Wilderton and Goyer. I remember your Mother being a regal lady. She was always generous allowing my brothers, Leon and Bob (obm) to use your bicycles. May all your wonderful memories help you through this difficult time.

Dear Morris, Harvey and Family, I will never forget the day I met Hanka, drawn to her by her tattooed number. This forged a private, but life-long bond and I think of her (and Jonas) often. I will always remember Hanka as a resilient, independent-minded, intelligent, and graceful person who was immensely proud of her family. Years later I had the honor of being Morris’ student in France and marvel at how his foresights about technology are deeply integrated into the reality of our daily lives. Truly amazing! Hanka and Jonas did indeed build a beautiful family, and my sincerest condolences to all of you.

Dear Morris, Harvey and the entire Goldberg Family, We met Hanka (and Jonas) when we were neighbours on St. Kevin. We became very friendly and thought of Hanka as part of our extended family. She was a proud woman and very independent. She was always generous, helpful and kind to us. We are grateful that we got to know her and hope that she is resting in peace. Baruch Dayan Haemet.

Dear Harvey , Morris and family,, I met your beloved Mom in Surfside during the early 90’s when she would winter in our building. She always engaged me in intelligent conversations about the war, Montreal ( my home town) and current events. We would lapse into Yiddish and always enjoyed each other’s company, although I am from the “next generation”! She was so very proud of her 2 sons!! May she be a strong beseeched on behalf of her loved ones and May you be comforted among the mourners in Jerusalem.

Dear Morris, Harvey, My condolences on the loss of your mother Hanaa. May she Rest In Peace.

Dear Harvey, Jessie & Goldberg family Our heartfelt condolences on the loss of Hanka. May all your cherished memories help to comfort you during this difficult time. May you be spared further sorrow. Fondly Doris & Eli Ambar

Dear Morris and Harvey, I have very fond memories of your Mom. She survived the horrors of the war to rebuild her life with her beloved husband children and grandchildren of whom she was extremely proud.May you find comfort with your wonderful memories, Sonja

Dear Morris, Harvey and family, I have the fondest memories of visiting your parents as a child and of spending time with Hanka, who always took an interest in my life and always made me feel very special. She was immensely proud of both her sons and loved to talk about your accomplishments and of course, her grandchildren. You were her everything. She endured the unimaginable, yet lived her life with grace, kindness and humility. May your family know no more sorrow and may your good memories give you strength during this difficult time.

Dear Morris & Family, Please accept my heartfelt condolences on the passing of your beloved Mother. My thoughts are with you at this most sad and difficult time. Most sincerely, Enid (former Geriatric Clinic JGH)

Dear Hanka Goldberg Sons, So many years have passed when I sat with your mother and my mother in her backyard. Those were the days when I heard the stories of our parent's wartime experiences. These were a special breed of ladies...kind, intelligent and loving despite the horrors they went through. Sending my deepest condolences for the loss of your proud and loving mother.

Dear Goldberg Family, I am so sorry for your loss. My mother Faiga Alter was a good friend of your mother’s. As a child I would visit your mother with my mother. I always admired her grace and intellect. May her memory be for a blessing.

Dear Morris ,Harvey & Families . Hanka was with us at Beit Chai for 11 years . Over the years all of the staff grew to know her ,and admire her . She will be missed by everyone . Boruch Dayan Haemes 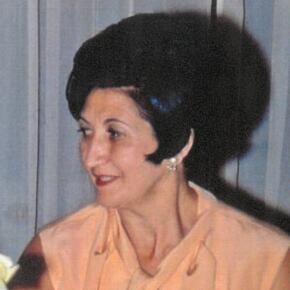 (née Kozitza)
Holocaust survivor
Hanka Goldberg was born July 22, 1922 in Plonsk, a village near Warshaw, known for its active Zionist organisation and the birthplace of Ben Gurion. She passed away quietly without pain on Friday, December 31, 2021. Hanka is survived by her two sons Morris and Harvey, daughters-in-law, Mila and Jessie, 7 grandchildren, Lydia, Lena, Eva, David, Sabine, Daniel, Natalie, and 5 great-grandchildren, Akira, Eden, Ruby, Oliver, Mara Eve.
She was one of 5 daughters and one son of Moshe and Mindl Kozica; all but two of whom perished during the war.
Hanka was an exception for her time as she was proficient in Polish and finished high school. Hanka and her younger sister Bela were deported to Auschwitz in December 1942 and were liberated by the advancing Russian army in January 1945. Hanka owes her survival in the camps to the resiliency and courage of her sister.
She first met her husband-to-be, Jonas, in the camps (across the fence separating the men from the women) and they agreed that they would meet in Poland at war's end.
They were married in Traunstein, Bavaria, located in the American Zone and where Hanka gave birth to Morris, on December 27, 1946. Jonas, a furrier, by trade, quickly found work refurbishing old fur coats and trading on the black market. They moved to Israel in May 1949 with many goods ranging from household items to a truck and even a dismantled brick factory; alas Jonas' plans were stifled by the Histradut. In 1952 they decided to up roots and move to Montreal and on the way stopped in Paris to meet Jonas' cousin who tried to convince them to stay. Hanka enjoyed visiting the sights, attending the opera, but in the end they decided they wanted to leave the Old World. Harvey was born the following year in Montreal and over time, they built a new life mostly surrounded by other survivors, raising their children and providing them with a Jewish education. Hanka's sister Bela and her daughter Mina followed in their footsteps and lived with them for a while before marrying and moving to Boston.
Hanka was always very fashionably attired, and was greatly attentive of her clothing, her home, and enjoyed entertaining friends, and with more time on her hands she would     volunteer for charities such as meals on wheels. Hanka delighted in feeding her grandchildren her specialties such as the walnut torte for birthdays and her potato kugel for all occasions. And then one year they discovered Florida and would eventually spend more and more of their winter in Miami Beach meeting their landsmen from Plonsk who survived and immigrated to the United States.
Jonas passed away in 1987 and Hanka continued wintering on her own in Surfside, aptly in the same building where Bashevitz Singer stayed for the next 24 years. Hanka was very sociable and would always strike up conversations with people; her most remarkable encounter was with the then President Clinton as he was coming out of the Bal Harbour hotel for his morning jog, protected by the Secret Service agents. As she approached, President Clinton seeing the tattoo on her arm came forward to greet and speak with Hanka.
With her health failing Hanka spent the last 11 years of her life in Beit Chai residence where she was cared for with much patience and kindness.
A private graveside service to take place. Shiva strictly private.
Contributions in Hanka’s memory may be made to the charity of your choice.

Leave a condolence for Hanka Goldberg