Naomi and Andrew, So sorry to hear about the passing of your beloved mom. She was such a positive person with incredible kind and generous energy. Always warm and welcoming and she will be very missed. Peace to you both. xo

Dear Naomi & Family, So sorry to hear of the loss of your mother. Our deepest sympathy at this sad and difficult time. Shelley & Michael Horlick

The Benzion Levi Family - 28 days ago

Dear Andy, Mira, Shany, Seivan, Elad and Family, Our heartfelt condolences on the passing of Meira. Rodi will always remember Meira as a positive and friendly person. Our thoughts and prayers are with all of you at this sad and difficult time. Sincerely, Rodi, Michal, Mitchell and Family

Andrew, my condolences on the loss of your mom.

To the family of the late Meira Engelhardt, On behalf of the staff and management of Israel Bonds, please accept our sincere condolences on the passing of Meira. Our thoughts are with you at this difficult time. May your memories give you comfort, and may you be spared further sorrow. With our deepest sympathy, Israel Bonds/Canada-Israel Securities, Ltd.

Deepest condolences to the family. she shall be missed. תנצב״ה

Naomi and family, our deepest condolences. Our thoughts and prayers are with you during this difficult time. Amy and Jesse

Naomi, Andy. and Mira So sorry for the loss of Meira - have wonderful memories of all our visits on Park Avenue and in later recent years spending time with her. She will be greatly missed.

Marty and Sanda Granner - 30 days ago

We are thinking of you at this sad time. Sending deepest condolences .

Gross Family - about 1 month ago

Rhona & Ross Switzman - about 1 month ago

Dear Andy, Naomi and family, May memories of happier times sustain you at this time of profound sadness. Our deepest condolences, Rhona and Ross

Florence Cohen - about 1 month ago

Dear Andrew,Naomi,and family. So sad to learn of the loss of your dear mother. Oh how I will miss my dear friend and neighbour Meira Meira and I would walk every morning for 45 minutes. It was the highlight of my day Meira made me feel like I was part of your family, she always Included me in all family holiday celebrations. Her ritual of phoning me to advise me what tv program to Watch. It was her kind way to keep in touch. I will miss her very thoughtful gestures, and happy memories Spent with her. Rest peacefully Dear Meira Blessings Florence

Peter Small - about 1 month ago

Dear Naomi and family We are so sad for your loss.Her visits to our department were always a bright moment.I know what a wonderful mother and grandmother she was. May she Rest In Peace. Peter and Rhona

Patti Derstenfeld - about 1 month ago

Dear Engelhardt Family, On behalf of the Volunteer Department of Donald Berman Maimonides Geriatric Centre, I would like to extent my most heartfelt condolences to you on the passing of Meira. Meira was a beloved and dedicated volunteer with our Therapeutic Recreation Department for many years. She fulfilled her volunteer duties despite the weather, or health challenges and always had an inspiring outlook on life. She was most proud of her devoted children and grandchildren. May you all be comforted by the wonderful memories she left with you.

Shari Leiffer-Cohen - about 1 month ago

Naomi and family. My heart broke when I read the news. We go back to when we were kids next door. Your mother was very strong! Our hearts are with you in this time of mourning. She will rest in peace!

Marlyne Waldman - about 1 month ago

Dear Naomi & family My condolences to everyone. May all your cherished memories of your mom and grandmother give you comfort in these difficult times. Marlyne Waldman

Debbie Berlach and Ron Csillag - about 1 month ago

Naomi, Andy, Mira, and families please accept our condolences on Meira's passing. Growing up she was a tiny, but mighty, presence in my life. May the many memories be a blessing.

Karen and Stephen Tafler - about 1 month ago

Dear Naomi and family, Please accept our deepest sympathies on the loss of your mother, grandmother and great grandmother. Cherish the memories as they will help you to heal.

Aviva Fuchs - about 1 month ago

Dear Andy, Mira and family, My thoughts and prayers are with you!

Lucy Bridgeman - about 1 month ago

Dear The Engelhardt family. I am very sadden to learn about the passing of my dear Meira. She was my volunteer, my friend, my little angel-and the best latkes-maker. When Meira started to volunteer in the Therapeutic Recreation Dept. at DBM, our spirits automatically clicked. She trotted over every Thursdays, in the rain, the snow, in the heat. Meira was a true Matriarch. She loved her family with all her entire soul. She talked about her precious Family, the grandchildren and those little great grandchildren. She was so proud of you. Most of all, she made sure ever milestones were celebrated , where she cooked , baked and celebrated all the holidays. Meira’s legacy will continue through you her precocious family. I could go on, but I want you all to know how found I was of Meira. Even when she couldn’t volunteer anymore, we spoke regularly on the phone. Even when she was in pain, she never complained. She wanted to know how I was doing. Dear Meira, I miss you so much. I will cherish your dedication, your memories and I hope you are resting in peace. My sympathy to the entire family.

Gaby Artzi - about 1 month ago

Dear Engelhardt family, Meira was a loving neighbour, in the past we periodically spent time walking together. I am so sorry for your loss, she will be missed, Please accept my heartfelt condolences at this difficult time, תנצבה Gaby

Raizel Candib - about 1 month ago

Dear Naomi and Andy, I remember your mother from when I was your teacher at the Avrom Reisen School and at Wagar High School. She was an energetic and vivacious person. Please accept my sincerest condolences. Raizel Candib

Sandi and Norman Parnass - about 1 month ago

Dear Naomi, Judy, Keryn and family, We are so sorry for your loss. We are thinking of you during this sad and difficult time. Sincerely, Sandi and Norman Parnass

Billy and Keila Finkelstein - about 1 month ago

Dear Engelhardt family, Our deepest sympathies on the loss of your dear mother, mother-in-law, grandmother and great-grand mother. She was a very special woman who I very much enjoyed seeing and taking care of over the years. She knew what she wanted and didn’t hesitate to tell me. The staff truly enjoyed when she brought her delicious banana cake for everyone to share. May your many wonderful memories of her comfort you during these difficult times and you should know no more sorrow. BDE Dr. Billy and Keila Finkelstein

Pia &Mel Guralnick - about 1 month ago

Dear Naomi &Family We are saddened to read the passing of your Dear Mother. Please accept our sincere condolences of your hard-working, kind , considerate mother.

Marla and Cliff Benderoff - about 1 month ago

Dear Naomi, Eli, Judi, Keryn and your families. It is with sadness that I learn of the loss of your mother and grandmother. To you and your families, Cliff and I extend our deepest condolences. Our hope and prayer is that knowing that others are thinking of you now will help you through these difficult times. May your memories provide you with comfort. Best, Marla and Cliff

Evelyne and George - about 1 month ago

Dear Naomi,Andy,Mira Our sincere condolences on your mom’s passing. She was a special lady. So many fond memories of When Our lives were linked together. Very fondlly. Evelyne and George and family.

Abe Fuks - about 1 month ago

Dear Naomi and Andy, Please accept my sincere and heartfelt condolences on the loss of your Mother. We were neighbours on Park Ave and I remember your Father and Mother so clearly. Remarkable people with a strong dedication to family. I am sorry for your loss and hope you and your families will be spared from further sorrows. Abe

Marion & Claude - about 1 month ago

Dear Naomi, Andrew & Mira Our deepest condolences to you and your families. Our families have had a long and deep connection. So many memories. May your namories be a blessing 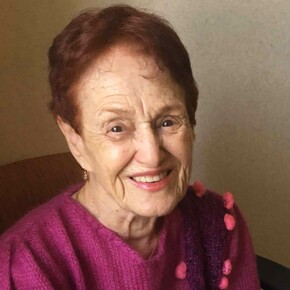 Peacefully, after a long hard-fought battle, on Sunday, November 7, 2021. Devoted wife of the late Ted z”l. Beloved mother and mother-in-law of Naomi and the late Ephraim (z”l) Chemtob, Andy and Mira Engelhardt. Cherished grandmother of Eli, Judy, Keryn, Shany, Seivan, and Elad. Proud great-grandmother of Carter and Thea. Dear sister and sister-in-law of Yigal and Dahlia Granov, Yair and the late Shlomith (z”l) Gross. Meira will be missed by her nieces, nephews, family, and friends.

Meira was born in Israel and moved to Canada as a young woman. In Canada, she married Ted Engelhardt, who passed away at a young age, and Meira was left to bring up her children alone. She was a strong matriarch who had a great influence in the lives of her family members. A private funeral service to take place. Shiva private.

Leave a condolence for Meira Engelhardt