Dear Sheila, Lenny, and Family, I would like to express my deepest Condolences on the loss of your Brother. May his memories bring you and your Family comfort during this difficult time.

Dear Hy and family, Rhoda and I wish to express our deepest condolences.

Penn and Malin Families - 14 days ago

To David's Family, Sheila, Leonard, Janina and Joseph, We send our sincere condolences on your loss. Thinking of you at this difficult time.

To Beatrice, Leonard and family: I send my sincere condolences on the loss of your brother, brother-in-law, and uncle.

Dear Sheila, Leonard, ,Janina and family. Sincere condolences on your loss. May your memories provide you some solace at this most difficult time.

My deepest sympathies on the loss of David. We were friends when David lived and worked in Montreal . I am saddened that he passed so young . He will be missed by his Montreal friends. Rest In Peace David. BDH

Dear Sheila and family, I am very sorry for your loss. Although I never met your brother David, I have no doubt he was a very fine and kind person as all the other family members that I did meet. With deepest sympathy and sincere condolences. Honnie Derai

Dear Sheila, Leonard and family, On behalf of Smile on Seniors Chabad Cote St. Luc, please accept our most sincere condolences. Our thoughts and prayers are with you at this difficult time. May your memories of David comfort you and be a blessing. BDH Rabbi Levi and Chaya Naparstek and Aviva Fuchs

The Lehrer-Adams family - 16 days ago

To the Rafal, Pleet, and Rosmarin family, We were shocked and saddened to read about your beloved David ז"ל . We extend our deepest sympathies to you at this time, and we hope that you will be comforted by your many wonderful memories. May he rest in Eternal peace. המקום ינחם אתכם בתוך שער אבלי ציון וירושלים Ha’makom yenahem etkhem betokh she’ar avelei Tziyonvi’Yerushalayim. Leiba, Charles, and Rhonda

Janina my condolences to you and your family for the loss of your uncle. 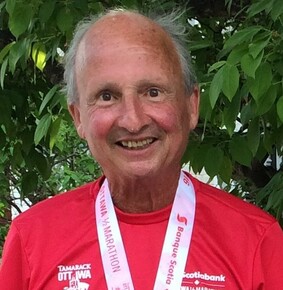 On Monday, December 12, 2022, in Barbados. Twin and best friend of the late Ruth Rafal Adler. Cherished brother and brother-in-law of Sheila and Leonard Pleet, Beatrice and Leonard Rosmarin, and Hy Adler. Devoted uncle of Chantal and Andy Jenicek, Nicole and Bruce Kinney, Danielle Rosmarin and Eric Allaire, Roselle Adler and David Zinman, Janina Pleet and the late Jason Issley, Joseph Pleet, Melodie Adler and David Teplitsky. Extraordinary great-uncle to William and Virginia, Jared, Leah, Brooke, Rachael, Anika and Max. He will be deeply missed by his many cousins, friends and neighbors.
Born and raised in the Eastern Townships, David was the fourth child of the late Ella Rosengarten Rafal and the late Dr. Joseph Rafal. He earned a Bachelor of Arts in Geography from McGill University in 1970, and spent the first part of his career working in sales in Montreal, and later, as a logistics manager in Brampton. He was an accomplished marathoner well into his seventies, and a proud torch-bearer for the 1988 Calgary Olympics. David pursued his passions for running, photography and wildlife during his many international travels. He also enjoyed full days in his backyard, cultivating varieties of roses, listening to classical music, reading or just taking in the sun. His gentle demeanor, thoughtfulness, and love of nature will be forever remembered by his family and friends. Funeral service from Benjamin's Park Memorial Chapel on Friday, January 13 at 12 p.m. Burial at the Community Section, Pardes Chaim Cemetery, Vaughan, ON. Shiva private. Contributions in David's memory may be made to The Terry Fox Foundation, https://terryfox.org.

Leave a condolence for David Rafal