Stanley, Karen and your families: We are holding you and Auntie Elanor in our hearts and prayers. May her memory live on in you and all of her family. Sending so much love. 💜

Dear Stan, Karen and the rest of the family, Our hearts are breaking for you during this very difficult time. We are so sorry for your loss. Rest In Peace, Auntie Eleanor. Thinking of you, Andy, Neil, Lexi, Tristan and Joey

Dear Stan, Karen and family, We are so sorry for your loss. Thinking of Auntie Eleanor and all of you during this difficult time. Caralee, Jason, Natalie, Gabriel and Sami

Dear Stan, Sharon and Family, My Condolences to you on the passing of Ellie. I was part of the Cummings Centre Choir for many years. Ellie loved singing & dancing in the Choir. Rest in peace Ellie.

Dr Stan, So sorry to hear about your mom...I hope have many wonderful memories of her and I wish you a long life Dr Sue

Dear Stan & Sharon, Sincere sympathies on the passing of your beloved Mother. May her memories remain a blessing. Rhonda Herman

Joseph and Cheryl Szwimer - 13 days ago

Dear Stan, Cheryl and I extend our sincere condolences to you and your entire family on the passing of your dear mother.

To Everyone in Elinor's Family, My sincere condolences. May she RIP. I am a neighbour, and thought she was kind and pleasant when we would meet up.

Stan, and family. Deepest condolences on the loss of your mother.. Cherish the great memories…RIP

Dear Stanley and Family: My deepest condolences to you and your family on the loss of your Mother, Ella. May her memory be for a blessing. Thinking of you at this difficult time.

Dear Stan, Sharon and family. My sincere condolences on your loss. May you take comfort in knowing that she is now resting in peace.

on behalf of the late Abe ,Sylvia and Mildred Freeman family Sorry for your loss

Dear Stanley, Karen and family, please accept my heartfelt condolences on the loss of your mom. Your mom was the greatest, I remember visiting at your house during college, she was wonderful always smiling always positive. I would see her at appointments at endocrinology, I always would enjoy talking with her. May her memory be a blessing.

Dear Stan, Sharon and family. My deepest sympathies to you and your family. Thinking of you during this difficult time. May her memory grant you strength during this sad time.

Dear Ruckenstein family. Sending condolences to you on the loss of your mother/mother in law. I’m the daughter of Frank Roll, who was your grandmother Clara’s brother. Your dad was my first cousin. I remember your mom well.

Dear Stan, Karen, Sharon & family. We were so sad to learn the news. It is difficult to lose a loved one, especially a parent. Take comfort in knowing that your cherished memories will continually keep her spirit close to you. Our deepest sympathies go out to the entire family. Maurice & Edda 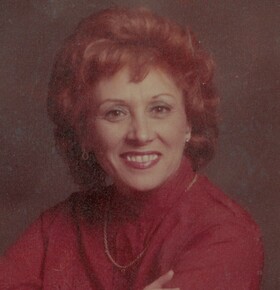 On Monday, November 14, 2022. Devoted wife of the late Rubin. Beloved mother and mother-in-law of Stanley and Sharon, Karen and Raffi. Treasured Bubbie of Jeremy, Jonathan and Juliana, and James. Dear sister and sister-in-law of the late Muriel and the late Louis Gillis, the late Lionel and the late Rose Williams. Sister-in-law of Helen and the late Hyman Ruckenstein, the late Dora and the late Nat Kaufman, the late Harry and the late Freda Ruckenstein.  Dearly loved aunt of Rosemary and Steve Caplan, Maureen and Joel Richler, Marsha and Seymour Ross, the late Diane Ruckenstein, Sheryl and Elliott Shuchat, Marilyn and Bernie Segal, Claudia and the late Hy Becker, Alan and Esther Williams, and their families.  Ella will be deeply missed by her family and all who knew her. Heartfelt gratitude to Diane for her loving care and devotion. Funeral service from Paperman & Sons, 3888 Jean Talon St. W., on Wednesday, November 16 at 2:00 p.m.  Burial at the B’nai Brith Section, Kehal Israel Cemetery, D.D.O. Shiva at 6655 Mackle Rd. #714, C.S.L., Wednesday from 7:00 to 9:00 p.m., and Thursday from 2:00 to 4:00 and 7:00 to 9:00 p.m. Donations in Ella’s memory may be made to the charity of your choice.

Leave a condolence for Ruckenstein Ella