Julia and family...My sincerest condolences to you and the Gersovitz family at this sad time...may your many happy and wonderful memories sustain you and bring you to the light at the end of this long and dark tunnel... Be well... Bea Freder

Dear Julia, Sincere condolences on the loss of your dear Father. May you find strength and joy in your wonderful memories. Bunny Berke

Dear Julia, My heartfelt condolences on the passing of your beloved Father. May the precious times you spent together be a constant source of comfort to you. May his soul ascend to heaven. Your shul friend, Riva.

Dear Julia and family, I am deeply saddened by Ben's passing. He was a lifelong friend and I will miss him. We last saw each other at the wonderful 100th birthday party which you held for him. And there are such special memories of Ben at many gatherings of the Engineering Class of '44. I am holding your family close to my heart as you live this bereavement. With condolences to all the family. Fondly, Tom and family

Dear Julia, Mark and family, Please accept our sincere condolences on the loss of your much-respected and beloved father. Abe and Maureen

My condolences Julia to you and your family. My thoughts are with you.

Dear Julia, Sorry to hear about the passing of your father. What a remarkable man. Avi Friedman

Julia, Mark and family- sorry for your loss. No doubt this will leave a big void given that you had him in your lives (and living so well) for so long. We are thinking of you at this time- Melanie Malus and Joseph Abramowitz

Dear Julia, Please accept my sincerest condolences on the loss of your father. He came across as an accomplished and wonderful human being in the recent McGill News article. May all your treasured memories give you strength and joy. He will live on in you and your family.

Dear Mark, Julia and family, Please accept my sincere condolences on your loss. May you find comfort and strength from your family and friends during this difficult time, and may your father’s memory be à bedding to you. Sincerely, Marc Gold

Dear Julia, Mark and family Avram and I send you our condolences on the loss of your father, father-in-law and grandfather. He was so very accomplished and lived a long life near you. What a blessing that was for him but for each of you as well. Cherish all your memories. well.

Dear Julia and Family, I'm so sorry to learn about the loss of your remarkable Dad. Having been your Shul-mate for so many years,I know how devoted you were to him.And,I'm certain too that your Dad in turn was very proud of you.My deepest condolences to you. Jackie Siblin

Dear Julia and family, I am so sorry for the loss of your dear dad. May you get much comfort from the precious memories that you will have of him. Sincerely Albana

To the family of the late Benjamin Gersovitz, On behalf of the management and staff of Israel Bonds, please accept our sincere condolences on the passing of Benjamin. Our thoughts are with you at this difficult time. May your memories give you comfort, and may you be spared further sorrow. With our deepest sympathy, Israel Bonds/Canada-Israel Securities, Ltd.

To Julia and family, With condolences on the loss of your father. I recently read with interest and respect the recent interview in the Mcgill News Magazine. I appreciated the wisdom he had to share. Sincerely, Doris Steg

My sincerest condolences to Benjamin Gersovitz's family and other loved ones. Julia has spoken to me with great affection and pride about her father. I'm sure he knew how much he was loved, and I know he will be dearly missed.

Dear Julia, Mark and Family, Our sincerest condolences to you on the sad loss of your beloved father. What a blessing for your family to have had him in your lives for so long. Myrna and Isaac

Dear Julia and family, I am so sorry for the loss of your dear dad. Julia, knowing how special you are, being his offspring, then, he must have been an exceptional person. May you get much solace from the precious memories that you will have of him.

Dear Julia, Mark and your extended family. We're so sorry to hear of the passing of your beloved father. May his memory be a blessing, and may you know no more sorrow.

Dear Julia, Ellen and I extend our heartfelt condolences on the passing of your father. We hope you will take all the necessary time to adjust to your loss and to store cherished memories of your time together.

So sorry to read of the loss of your father. I wish for you to find comfort in fond memories you shared in the scent of the pine trees, songs of the birds, and the sound of the waters of Trout Lake.

Dear Julia, Mark, Jeremy, and family; Our deepest condolences on Ben's recent passing. May you take comfort in his remarkable legacy and the many wonderful memories you have of him.

Dear Julia, Mark &Family Please accept our sincere condolences on the passing of your dear father. You have been blessed to have him in your lives for so long.

Dear Julia, Mark, Frankie & Jesse, Robbie & I were saddened to hear of your loss. Our thoughts are with you at this difficult time. Please accept our deepest condolences.

Dear Julia and family, I'm so sorry about the passing of your dad. May his memory be a blessing. Sincerely, Randi

Dear Julia, Mark, Jesse and Frankie, We are sorry for the loss of your very special Ben. How special a father, grandfather and gentle soul he was. We are grateful for the wonderful memory of times we shared with him and we know that you all have a rich treasure of memories that will always inspire you. Our hearts go out to you during this difficult time. Please accept our deepest condolences. Love, Joel and Louise 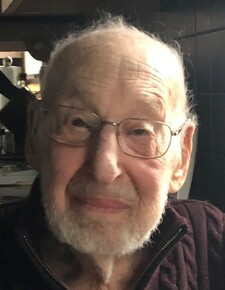 Unexpectedly on Friday, May 6, 2022, weeks short of his one hundred and third birthday. Adored husband of the late Sarah Valerie (née Gammer). Adoring father of Mark (late Karen Neander), Julia (Mark Boretsky) and Jeremy (Peggy Donahue). Doting zaida of Alexander, Jesse (Marisa Corona), and Francesca (Louis Clouâtre). He was an inspiration to his many nieces and nephews and to all who knew him as a generous man, a gifted engineer, builder, designer and teacher. Ben was the son of Joseph and Rachel (née Vosberg) Gersovitz. Dear brother of Florence Ortenberg, the late Frank Gersovitz, and the late Dorothy Freedman. Born on Saint Urbain Street, he was raised in Westmount and educated at McGill University. Funeral service from Paperman & Sons, 3888 Jean Talon St. W., on Tuesday, May 10 at 11:30 a.m. Burial at the Congregation Shaar Hashomayim Cemetery, 1250 Ch. De la Forêt, Outremont. Shiva at his home. Contributions in his memory may be made to the “Benjamin Gersovitz Memorial Fund” c/o Jewish General Hospital Foundation, (514) 340-8251, or to the Meals on Wheels Fund c/o Congregation Shaar Hashomayim, (514) 937-9471.

Leave a condolence for Benjamin Gersovitz