Dear Henry, I am truly saddened about the passing of your beloved mother, which I just found out about today. Sophie was a true gem of a person, always full of life, vivaciousness, and kindness. I spoke to her not too long ago, and I am glad that I did. I will always remember the good friendship your parents had with mine for so many years and all the memorable times they shared together both in Montreal and in Florida. I am so happy that I regularly kept in touch with your mother and saw her the last time she was in Florida, as well as when I was in Montreal in 2019. I will always remember her for the exceptional spirited warm person that she was. Our deepest condolences go out to you, Anne, Oliver and Samuel. May her memory be a blessing. Linda & Mark Beck (Florida)

Dear Henry, My sincere condolences on the loss of your mother. I remember meeting your lovely parents at a parent teacher interview. They were such a beautiful couple. Your father always greeted me warmly when I would come into the Brown Derby. You were their greatest love. I hope that the wonderful memories you have of your mother will be of some comfort during this difficult period. From one of your teachers of many years ago. Florence Chaikelson Mitmaker

Dear Henry, Anne, Oliver and Samuel We were so sad to learn of the death of your most marvellous mum. She was a person of extraordinary beauty in every sense -her wisdom, her joy, her indomitable spirit. May her memory be forever a blessing. Jill and Don Sinclair

Dear Henry and family, Was so saddened to hear about the loss of your mom. My deepest condolences, may you take solace in the wonderful memories you shared

Dear Henry, I was a partner with Zittrer Siblin. We were the auditors of the Brown Derby. I have wonderful memories of both your parents. They spoke of you often and were both so proud of you. Your father was a gentle man and very much a gentleman. Your dear mother was a classy lady always with a sparkle in her eye. May you know of no more sorrow. Sincerely, Morton Spector

Dear Anne, Henry, Oliver and Samuel: I am so sorry to hear of the death of your mom, mother-in-law and grandmother. A lifetime of memories of her are cascading through my mind. She was force of nature, and you are all so fortunate to have had her love, her humor, and so much for so long! May she live on in all of us, may her life be a blessing!

Dear Henry and family, Please accept my sincere condolences on the loss of your dear mother. May you and your family be spared further sorrow and may her memory be a blessing. Decades ago when I worked as an accountant, your mom and dad were my favourite couple to meet with - they were both such lovely people.

Dear Henri and family My sincere condolences. Your mother will forever be in my heart. She was a special lady with a wonderful joie de vivre. May her memory be a blessing.

Dear Henry and family, We are so sorry to hear about the passing of your beloved mother.She was a beautiful lady,full of energy and always with a smile.Our deepest sympathies to you and your family.May her memory be a blessing. Mimi and Howard Shiff

Dear Henry , My sincere condolences to you and Anne and the boys. Your mother was a true lady, one of a kind . Sophie always had a smile , accompanied by a good joke. You’re mother was an inspiration to all how to live life and she light up the room. I only have fond memories of our time. May her memory be a blessing . Much Love, Shoshana & Sass Peress

Dear Henry and family, My sincere condolences on the loss of your dear mother. Her life story was truly an inspiration to me. May your memories may be source of comfort at this difficult time. Sincerely, Jill Cracower

My dear Henry. My condolences to you, Anne and the boys. My sweetest memory is in Florida. Kelly and I were walking on the boardwalk behind your mother and my mother. Our fathers may have been behind us. I saw our mothers arm-in-arm as two Polish school girls might have walked or skipped together before the war, talking, and gossiping and laughing. It was just beautiful! I will miss your mother as I do, my own mother. Jackie

Tom and Pamela Najman - 28 days ago

Dear Henry and family. We are so very sorry to hear that your beloved mom passed away. We remember her for her radiant smile and her always being caring and gracious to everyone. May all the warm memories guide you through this difficult time and may this poem by Richard Fife give you comfort and strength … “Those who live no more, whom we loved, echo still within our thoughts, our words, our hearts. And what they did and who they were becomes a part of all we are, forever.”

Henry, sorry to hear the passing of your mother. I still remember her from way back when we were 5 year old kids playing in the back yard in Parkex in the late 50's and her calling you up from the back balcony for supper or some trip to Chicago or Vienna.

Sarah and Danny Samra - 28 days ago

Dear Henry, Your mom and dad were a beautiful, loving couple. We recall meeting all of you in Monte Carlo, then going to your parents’ place for a smoked meat sandwich and pizza on the Italian Riviera. Back in Montreal, Henry and Sophie came to our place for dinner. They were such fun. Youthful, full of stories, exchanging loving looks with each other. Romeo and Juliette, had they survived and lived to an older age. I adored them. The last time I saw Sophie she was attending a lecture in McGill given by one of your poli sci profs. She was inordinately proud of you. I have some photos of them together. I cherish these memories. Hope you are well. Sophie and Sam to me, are one name, bound together in love and twinkling eyes, . I hope they are at peace now, together again. May you know no more sorrow. Sarah

Dear Henry and family. I am so sorry to hear the news of your loss. Sophie will always be remembered, greatly missed. Love Lawrence

We are sad to find out Sophie has passed &we befriend her & Sam when they were neighbours on Bonavista & wonderful & kind people & what a piano player. Also to Henry our sincere condolences & we’re happy to see that you have children . I remember your graduation in England . To all long life & Good health. Ethel & Bert Cohen ( Miami) 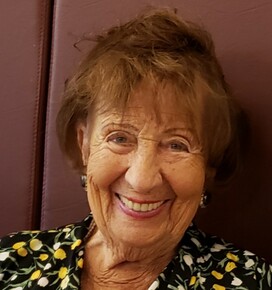