Dear Evelyn's, My thoughts are with you at this very sad time. My condolences to you and your family.

Evelyne, it has been many years, but I remember wonderful times "playing" outside with you and Linda on Harvard , and remember your Mom keeping a watchful eye. Hope wonderful memories of your Mom will bring you comfort.

Dear Evelyne, Marc & family I wish to extend my condolences to you all. I met & shared many happy occasions at Rachel's, where Faiga & your Mother were always invited. I enjoyed speaking to your Mother. Sometimes we went to a concert or lectures together, it did not matter to me the difference in age , because "the ladies" were the cultured Parisennes ladies. I was privileged. May the memories comfort you at this time All my love Yvonne Margo - Jerusalem

Henza and Steven Fishman - 15 days ago

Dear Marc, Steve and I want to express our sincerest sympathies to you and your family on the passing of your mom. May happy memories of your mom comfort you during this sad time.

Dear Evelyn and family, please accept my my most sincere condolences on the passing of your dear mother. May she Rest In Peace. Love, Margot.

Dear Lauren, Jason informed me of the loss of your grandmother. I wanted to extend my sincerest condolences- I know what a difficult time this is. Relationships with a grandparent are so very precious, and I hope your memories of the times you enjoyed with each other will help heal your heart. Arms around you - Wendy

Dear Evelyn, My deepest condolences and sympathies to you and your family on the loss of your mom. May she rest in peace.

Dear Evelyne and Marc, My heartfelt condolences on the loss of your mum. I hold wonderful memories of Mme Landau going way back - times my mother and I spent with your mum, with you and of course, your lovely (and very missed) aunts, Rachel and Feiga. Your mother was always charming, always gentle and so refined in that inimitable French manner, I hope that the memories you have of your mum always be a source of comfort and support. Warmly, Valerie

Evelyne My sincere condolences on the loss of your mother.Cherish all the memories.

Our deepest sympathy on the loss of your beloved mother. We know how devoted you were to her and what good care you took of her. May her memory be a blessing. Lorna and Denis

Dear Lauren, Evelyn and all the family, My deepest condolences. I didn’t know Mamy Colette, but I knew how much she was loved and cherished. How grateful I am to her, for the love I saw in Lauren’s eyes when she spoke of her. May she rest in peace.

Lynn and Morrie Weinberg - 16 days ago

Dear Evelyne- Our deepest sympathies on the passing of your dear mother . Our thoughts are with you st this difficult time.

Dear Evelyn I am so sorry to hear of the passing of your Mother. May her memory be a blessing and may she rest in peace.

Dear Evelyn and family, Michael and I send you our deepest condolences on the passing of your mother .We are thinking of you during this difficult time. Susan and Michael Segall

I have so many beautiful memories with Lauren and her dear Mamy Colette, what a life and legacy. My deepest condolences and love.

Dear Evelyne & Family, We were most saddened to learn about your mother's passing, & want to extend our deepest sympathy to you & your family. Evelyne, you were the most caring daughter...devoted & attending to every detail including appointments & your mother's well being. Cherish your treasured memories. Warmly, Riva & Carl

Evelyne, Lauren and family, I'm so sorry for your loss. Her picture here makes me smile: It reminds me of how special she was. She was always a pleasure to see or speak to, may her memory be a blessing. My love and condolences to you at this time.

Dear Evelyn’s,please accept our condolences ,On the loss of your mother.She was lucky having such a devoted daughter to care for her.

Dear Evelyn, It seems like a lifetime ago that we were young kids and going to afternoon school at Shaar Zion. Your mother was a very classy lady, and the few times I met her at Beth Tikvah, I was always happy to see her. Barry joins me in sending our sincere condolences during this very sad and difficult time. Our thoughts are with you.

Dear Evelyne & Family, We were so sorry to hear of the loss of your dear mother. We remember her as a neighbor to Jonas’ parents on Old Orchard Please accept our deepest condolences

Dear Marc and family. My deepest condolences on the loss of your dear, resilient Mom. Despite her full, long life, it is so difficult to say good-bye. Hoping that your rich memories of her will sustain you during this difficult time.💕

Dear Evelyne , My deepest sympathy on the passing of your beloved mother. You were truly a devoted daughter, always there for your mother, always caring for her needs. I wish you strength during this difficult time. May her memory be for a blessing. Faigie

Dear Evelyne and family. I was saddened to read of your mom’s passing and send you my heartfelt condolences.

Dear Evelyne, I remember discussing the best possible environments for our aging mothers and comparing notes. I was impressed by your devotion and determination. I didn’t realize that our respective mothers, z”l, we’re both Holocaust survivors. I hope you and your family are blessed with happy memories of times past and long life. BDE.

Dear Evelyne. Condolences on the loss of your Mother. We know how you constantly cared for her and how devoted you were to her. Remember and cherish all the good times and have no more sorrows Doris and Danny

Dear Evelyne and family. Although I didn’t get to meet your mother, I know that you treasured her dearly, and took care of her for many years. As your Hadley neighbour, sending you my sincerest condolences on your loss. May her memory be for a blessing. Barbara Cieply benizri

Dear Evelyne, So sorry on the loss of your dear mother. May her memory be for a blessing. May her soul rest in peace.

Denise and Sheldon Popliger - 17 days ago

Dear Evelyne and family, Our sincerest condolences . It was always a pleasure to see your Mom on her visits to Dollard. She was a warm and friendly person . You looked after her every need and care for her welfare. She was so proud of her family. May the many fond memories of 4 generations bring you comfort in the days to come. BDE

Dear Evelyn and family, My sincere condolences on your mother’s passing. I know how devoted you were to her. May her memory be a blessing.

Dear Evelyn and family, Joe and I extend our deepest condolences to you and your family on the loss of your mother. I moved into our home on Harvard when I was 8 years old and have known you and your family since then. Your mother was an elegant woman, always well dressed, and always welcoming. She was very kind to me and my family. The quality that stands out most to me was her resilience and strength. She was a woman ahead of her times. We hope that you are comforted by the memories and good times spent together and that you draw inspiration from her long life and legacy. All our best wishes during this difficult time. Linda and Joe

Dear Evelyn, Marc and families, Please accept my sincere condolences on the loss of your dear mother. She was lucky to have the care you provided for her in her last chapter. I will always remember her fondly.

Dear Evelyn and family, my condolences on the passing of your matriarch. May you be comforted in your family and the community. Boruch Dayan haEmet.

Mamy Colette was cheerful and fun company. I remember our getting together, socially even after a certain time. Eric and Lauren adored her and Laurie's devotion (living in Montreal) was ever present, particularly in these past few years. To Ev, Marc & Karen, I express my condolences with sincerity.

Dear Evelyne and Marc, My sincere condolences on the loss of your beloved Mom . Many years have passed but I have very fond memories of your Mom when we lived on Harvard. Mrs Landau was kind and very nice to my family.May her memory be a blessing Thinking of you at this difficult time.

Dear Evelyne, Lauren and Eric, Our family remembers your dear Mother and Grandmother Colette with great fondness, dating back to the days when you all joined us for Passover seders. She was always a charming and gracious lady, and will be lovingly remembered by all who knew her. She will be missed. 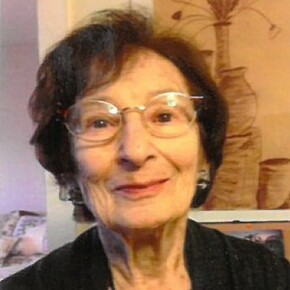 In her one-hundredth year, on Monday, January 9, 2023. Cherished daughter of the late Camille Bauer and Yvonne Alexandre Bauer. Beloved mother and mother-in-law of Evelyne Landau, Marc Landau and Karen Shopsowitz. Adored Mamy Colette of Eric Mandelker, and Lauren Mandelker. Proud great-grandmother of Victoria Miller-Mandelker. Sister and sister-in-law of the late Roger and the late Francoise; the late Fanny and the late Henri, the late Helène and the late Leon, the late Feiga, the late Rachel and the late Joe, the late Jacques. Colette will be deeply missed by her many nieces and nephews and all their extended families in Canada, France, Israel and the United States. She will be lovingly remembered by Eda and Marvin Schiff, ainsi que par sa fidèle amie, Claudine. La famille tient à remercier Françoise, Huguette, Rahel, et Almaz pour leur dévouement. The family would also like to thank all those who cared for her. Funeral service from Paperman & Sons, 3888 Jean Talon St. W., on Wednesday, January 11 at 2:00 p.m. Burial at the Beth Tikvah Congregation Section, Kehal Israel Cemetery, D.D.O. Shiva at Hôtel Ruby Foo's, 7655 Decarie Blvd. on Wednesday from 6:00 p.m. to 9:00 p.m., Thursday from 2:00 p.m. to 4:00 p.m. and 6:00 p.m. to 9:00 p.m., Friday from 10:00 a.m. to 1:00 p.m., and Sunday from 10:00 a.m. to 8:00 p.m. Donations in Colette’s memory may be made to Canadian Magen David Adom for Israel, (514) 731-4400, or to New Hope Senior Citizen Centre, (514) 484-0425, or to Alzheimer Groupe, A.G.I., (514) 485-7233.

Colette touched many lives and will be dearly missed. Baruch Dayan HaEmet.