To Rebecca and Daniel: Just found out today that Nana passed pass away. As you mark your first high holidays without her, take consolation in the life she lived. May memories of her be a source of blessings to you and your families.

I met Beryl at a wonderful dinner at Marcy's home. She was an engaging conversationalist with all of us around the tables as she shared stories of her youth and life. I shall always remember her fondly. May her family be blessed only with joy when thinking about her.

Dear Daniel and Rebecca, Sending my deepest condolences to you upon the loss of your grandmother. I know she left a deep mark on your lives, even more so as you took care of her in her final years. May her memory be a blessing and inspiration for you as well. Sincerely, Zev

Dear Daniel and Becky, Please accept my deepest sympathies on the loss of your Nana Beryl. You both spoke so eloquently in eulogizing her, sharing with us your heartfelt sentiments and the unique relationship that you enjoyed with her. My late mother, Dorothy Davis Raby, was the youngest of three siblings, Ben and Molly. They and your late grandfather Ralph were first cousins, and thus Beryl through marriage. Alice and I have fond recollections of a memorable visit she and Cookie made to our country home some years ago.

Our deepest sympathy to all the family. Beryl and Ralph were our good friends and we have fond memories of all the good times we spent together, here in Montreal and at Chantecler. May she Rest In Peace.

The Meagher Family - about 1 month ago

Our deepest condolences to Mrs. Goldman's family. We were blessed to be her neighbours for more then ten years. She was a gracious & classy lady, who was particularly affectionate toward our son Charles. Hats off to her beloved grandson Daniel who whole- heartedly watched over when her loyal friend and caretaker “Cookie” could no longer be up to the task. Her smile was contagious, we always enjoyed seeing her for the festivities of the moment. She will remain in hearts and memory forever. Go Habs Go Mrs. Goldman, May you rest in peace. Francis, Jasmine & Charles

Arlene Gittleson Sternthal - about 1 month ago

Dear Rebecca and Daniel, My mother Lorna and late father Mervyn Gittleson were very friendly with Beryl and Ralph years ago, along with David and Betty Marks. My mother remembers Beryl as an exceptionally warm and loving person with whom she shared many wonderful times. My sisters Paula, Donna and I remember getting together with Susan and Pam, who were around our ages. Our sincere condolences on the loss of your special grandmother. Our thoughts are with you. The Gittleson family.

Donald Doell - about 1 month ago

Andrea and I are so sorry to hear about your loss. I never had a chance to meet Beryl, but definitely felt I knew her based on all of the stories. We wish you peace, strength and lots of love during this difficult time.

Freddy - about 1 month ago

For Daniel and Rebecca, I give my sympathy for the loss of your Grandmother. Please take consolation in the knowledge that she lived a long full life. I, myself have memories of a happy, loving home on McShane Avenue with big Ralph, like a fresh Vienna roll, hard and crusty outside, soft inside. Susan, tall, dark, and my best friend's first crush. A quiet, reserved Pam. And of course, Berry who, to my untrained ears, sounded just like the Queen and kept that love and happiness lit, even though some very dark times.

Myer Bick - about 1 month ago

Dear Daniel and Rebecca, Berryl lived a long life, and except for the last few years, which was both interesting and beautiful. With her love and partner, Ralph, they shared many wonderful times together.. they were a very charming couple. I had the privilege to spend some terrific times with them learning their most interesting and eventful story..;2. and especially appreciated their instruction in fine art .David, it was especially thoughtful and generous of you to come to Montreal and take care of your grandmother . Both Berryl and Ralph leave a proud legacy in you and here in our city. May her memory be a blessing for you and your entire family. Sincerely, Myer Bick

Patricia Glick - about 1 month ago

Carol Davis - about 1 month ago

Dear Daniel, Becky and family Please accept my condolences on the loss of your beloved Nana. She was loved, admired and respected by my family. My father, Ben Davis was your grandfather's first cousin and my parents loved your grandparents very much. I always went to visit your grandmother when I was in Montreal and phoned quite often. She always kept me updated about family members and always remembered my children and grandchildren. She often told me how wonderful it was to have Daniel in Montreal and how exciting it was when Becky could visit. I know you two brought her much joy and delight. I am sad she is no longer in our world but she will always be in our hearts. Her life and her memory is a blessing to all who knew and loved her.

Gordon Vertolli - about 1 month ago

Dear Daniel My deepest sympathies to you and to the entire family. Gordon

Susan Lemco and Lemco Family - about 1 month ago

Dear Daniel and Rebecca, I can’t think of a time when the Goldman’s and the Lemco’s weren’t friends. Ralph marrying his “war bride” and bringing her back from the UK and Ruth( our Mother) being a WAF in the British airforce and immigrating from the UK , were just some of their shared experiences.Their mutual interests such as collecting Canadian art, loving everything British and their shared love of dining out ( Laurier bbq, La Sirene) and of course annual visits to Hotel Chanteclair we’re just some of the many cherished memories. Over the last few years as they aged and their worlds got smaller, Beryl had become a supportive friend and confidant to our Mother, Ruth. They often ended conversations with “I love you and you’re my best friend”. The world is a darker place without Beryl in it and we will miss her.

SPIEGEL - about 1 month ago

Dear Mark and Janis and Rachel and all the Goldman Family and extended Family and friends, Mark, you have spoken of your Aunt Beryl with profound respect and honor over the decades. Although we have never had the privilege of meeting her, our discussions about her have left us with an image of a kind, thoughtful, generous and intelligent person. We give you our deepest sympathies and heartfelt condolences. Fondly, Lorraine and Dan

Stuart Kozlick - about 1 month ago

Daniel and Family, So sorry to hear about the passing of your wonderful grandmother. Sincere condolences and heartfelt wishes to the entire family. Fondly, The Kozlick Family

Pam Litman - about 1 month ago

Dear Family, My heartfelt condolences to all on your loss. I knew Beryl and Ralph through my work at the JGH Foundation. They were a loving couple, who supported each other through many challenges. May Beryl Rest in Peace.

Myer Bick - about 1 month ago

Miriam Shporer - about 1 month ago

Our condolences to the family. We both worked at McGill Urology where we got to know Mr.&Mrs. Goldman- two wonderful people that we were very fond of. May your memories of your grandmother be a blessing. Fondly, Miriam Shporer and Carol Langsner

Elayne Silver Topolski - about 1 month ago

Dear Daniel and Rebecca So sorry to hear about the passing of your beautiful and truly wonderful Grandmother. My mother, the late Mollie Silver, was your grandfather’s first cousin so I always knew we were family and then through my children,Jill and Jamie and the time they spent at Duke we were all able to be together with your special parents and then with the two of you. Keep the memories of your close relationship to your grandmother and your parents deep in your hearts. You are part of a truly great family. With deep sorrow and love, Elayne.

Glenda Lubiner - about 1 month ago

My condolences to the family. My mom worked for Mr. Goldman for many years and always talked about how lovely Mrs. Goldman was. May your memories be a blessing.

Anita Ilieff - about 1 month ago

My condolences to her family.

Mark and Edna Mendelson - about 1 month ago

Dear Family A former dear friend of my late mother. A lovely woman who I also met and befriended through our common love of Canadian art. May you all be comforted by the wonderful memories you have of her-May her memory be a blessing-Yehee zichrah baruch. 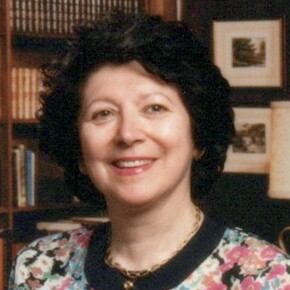 Beryl Cowan Goldman died peacefully at the age of ninety-eight, on Wednesday, August 31, 2022. Beryl was the dearly beloved wife of the late Ralph Goldman for sixty-two years. The daughter of the late Abraham Cowan and the late Edith Stein, Beryl met Ralph in her home country of England, where she was serving as a hostess at a canteen for soldiers stationed there during World War II. Ralph took one look at her, and the rest was history. Ms. Cowan became Mrs. Goldman when she married Ralph at the age of 21. She crossed an ocean to start a new life in Canada, wearing her identity as a War Bride as proudly as her husband wore his Royal Air Force badges. But England was never far from her mind, as she spoke with her sister on the phone nearly every day. Soon, the Goldmans would welcome two daughters, Susan and Pamela, and later (too much later, if you asked Beryl), two grandchildren, Daniel and Rebecca. Mrs. Goldman became known affectionately as Nana Berry, or just Nana for short, first to her grandchildren, and, in her later years, to everyone. She had an incisive sense of humor that never faded, a heart that grew kinder over the years, and an unbreakable love for family— all family: her husband, her sister, her children and grandchildren, her nieces and nephews, and even faraway cousins in England and the United States. She made everyone feel like they were as close to her as a sibling: Beryl remembered every dog’s name and never missed a birthday. Mrs. Goldman, Beryl, Nana: We love you. We are all grateful for your generosity. And we will forever admire your strength. Beryl is survived by her granddaughter Rebecca Feinglos of North Carolina, as well as her grandson Daniel Feinglos of Montreal and his fiancée Emilie Hudson. Beryl is predeceased by her husband Ralph Goldman, her daughters Susan Goldman Feinglos and Pamela Goldman Wexler, her son-in-law Dr. Mark Feinglos, her sister Shirley Cowan Gilbert, and her brother-in-law John Gilbert. Her grandchildren wish to thank Nana’s dedicated team of caregivers who made her last years at home possible, the Jewish General Hospital, and the CIUSSS Centre-Ouest’s home care services. Funeral service from Paperman & Sons, 3888 Jean Talon St. W., on Sunday, September 4th at 10:00am.  Burial at the Adath Israel section of the Baron de Hirsch Cemetery, 5015 de la Savane. Flowers may be sent to Paperman & Sons; donations in Beryl’s memory may be made to the Jewish General Hospital Foundation at (514) 340-8251, or to the Montreal SPCA at (514) 735-2711.