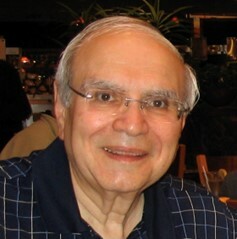 Peacefully at Baycrest , on Friday, May 13, 2022 in his 85 th year. A Montrealer until age 78 when  he and his beloved wife Harriet moved to Toronto to be closer to their children. Harry married Harriet on December 25 th 1966 in what is described as a “legendary” snow storm. Contrarily, this stormy day began a life together of 55 years of love, happiness, and devotion. Harry and Harriet were soulmates, best friends, confidants, and always by each other’s side. They worked together throughout their lives, in different businesses over decades. Harry, a child of immigrants, was the first person in his family to graduate university with distinction from the University of Montreal in Pharmacy. Harry was loved by his customers for his calm, compassionate and helpful demeanor. He was the beloved father and father-in-law of Eric and Sheri Horlick (nee Steinberg), and Jennifer and Sean Frydman. Proud Zaidye of Olivia, Cooper, Jonah, and Rylan. He is survived by his siters Ethel Kendall and the late Simon Kendall Z’L, Leba Carpman and the late Larry Carpman Z’L, Ruthie Felsher and the late Edward Felsher Z’L, and his brother in law Mel and Pearl (nee Raels) Enkin. Beloved uncle of many nieces and nephews.
Harry is pre-deceased by his parents, the late Abraham Z’L and Miriam Horlick Z’L, and his in- laws the late George Z’L and Edna Enkin Z’L. The family expresses our sincere appreciation to Baycrest, the staff of 5 south, and Dr. Hirani for their exceptional care.

Harry was a man of honour; honest and hard-working, and a role model for his children and all of us. Growing up, our home was filled with love, laughter, and encouragement; we look back on these years with fondness. While the road was not always smooth, he lead us, provided for
us, and educated us. His legacy has forever changed the world and the Jewish Communities of Montreal and Toronto. While sick for many years with Parkinson’s disease, we are lost without him. His exemplary life, values, and lessons will guide future generations of our family. Funeral arrangements entrusted to Steeles Memorial Chapel.

Leave a condolence for Harry Horlick