Hello from Long Ago, Rubenstein family! Came across this listing by chance just now, and had to express my condolences immediately. My parents were good friends with Wanda and Red.....they were often at our home and that of my grandparents, Bill and Sadie Gittes. My late sister Stacie and I carpooled to and from Temple-Emanu-el Religious School with you, and Stacie was friends with Elizabeth. When I first started learning to play the piano, we did not own one, so I went over to your home to practice on your instrument for about a year. Red was irreverent, always his own man, and interesting. I was describing your red-headed family to a friend only last week, little knowing that he had been around all this time. Anyway, may Red find peace where he is now, and may his memory be for a blessing.

Dear Phil - my deepest condolences to you and your family.

My family thanks everyone for their comments.

Dear Pearl - my deepest sympathies on the passing of Bernard. I remember him well even from that one brief meeting at our late cousin Rosalie's apartment many years ago. I wish you much strength during this difficult time.

Dear Pearl. Please accept my sincere condolences on the passing of your husband Bernard.May the wonderful life you enjoyed together remain with you always. Love, Pearl Levy

Dear Pearl, I am saddened to hear of Bernie's passing. I have fond memories of our many lunches at his special table at the Beaver Club. He was always ready for wonderful conversation about any topic of the day and was an excellent raconteur. I enjoyed working with him over many years and sought his judgment on many business decisions. A well-respected colleague and friend, he will be missed by all who knew him. My sincere condolences. Stephen Cheasley

Dear Pearl and Rubenstein family, I will always have fond memories of Bernard while growing up in my parent's home next door on Finchley Road. My late father Dave always enjoyed chatting with Bernard outdoors on many summer days as they both puffed away on their cigars. Bernard was an astute businessman and frequently offered excellent advice to my father and then in later years to me as we kept in contact. Please accept my deepest condolences to the entire family for your great loss. Best regards, Marty

Dear Pearl, my deepest condolences on your loss. May the wonderful memories you shared bring you comfort during this difficult time . Ellie

Dear Pearl, so sorry to hear of Bernard's passing. May you be spared further sorrows.

Sara and Steven Petroff - 22 days ago

Dear Pearl, We extend our heartfelt condolences on the passing of Bernard z"l. His presence always filled a room with his attentive, reserved nature which will be greatly missed. In time, may his memory be a source of strength and comfort. Sending you our love and support, Sara and Steven Petroff

Dear Pearl, My sincere condolences on the loss of your beloved husband. May the fond memories comfort you at this most difficult time. Florrie

Dear Liz, Robby, Michael, Phillip and Rubinstein family, Please accept my heartfelt condolences on the passing of your father. It is never easy losing a loved one, no matter what age we are. I hope you can find some comfort in the memories you shared together.

Stef and Stephane Langevin - 23 days ago

Dear Pearl, We are so deeply sorry for your loss. Bernard was such an accomplished man with you by his side for the last 34 years. May your fond memories together hold you up during these very difficult times. We are thinking of you from afar. Stef and Stephane

Dear Pearl and family, I was saddened to hear of Bernard’s passing. Bernard was a lifelong friend and I have nice memories of our friendship. Hoping your happy memories sustain you in in the coming days. Fred

Dear Pearl and family, Please accept our most sincere condolences on the passing of your beloved husband Bernard. May the family know of no more sorrows. Gloria & Wally

Dear Pearl I was sorry to hear about Bernard’s passing. My Sincerest condolences to you and to the Rubenstein family. Marilyn

Dear Rubenstein family: Like my brother Neil below, I remember Bernard fondly. He was a fine man who served his country with distinction. Our thoughts are with you all.

Bernard was an incredible individual, who lived a long and fulfilling life. He was dedicated to his profession, his community, his family, and his beloved Habs. He was a wonderful husband and partner to my mother for over 34 years, sharing fabulous times together. I always looked forward to my 1-1 chats with Bernard, learning something new each and every time we spoke...whether it was about him playing professional football, stories about being a tail-gunner in WWII, or simply debating politics and business. On behalf of my wife Debbie and our kids Jordan and Adam, I want to extend our deepest condolences to Bernard's children, grandchildren, great-grandchildren and extended family. He will be sorely missed, noting we all have many memories to find comfort in. May his memory be a blessing.

Dear Pearl & family : Please accept our deepest sympathy on the passing of Bernard. May he rest in peace. Hedy & Julius.

I worked with Bernie Rubenstein for over ten years on the renovation of the SunLife Building in Montreal. He certainly was a ‘straight-shooter’, kept everyone in line and his opinion was always respected by all. He seemed to be tough, however he had both a soft and friendly side that made it a real pleasure for me to have worked with him over the years. The last time we met it was by accident at a restaurant, we reminisced and joked about the good times that we had together. My sincere condolences to Pearl and the family.

Dear Pearl, We send your our sincere sympathies on the loss of Bernard. May your many wonderful memories comfort you during the coming days. Our hearts and thoughts are with you. Sharon& Chuck

Dear Pearl and family, Lottie and I wish to express our deepest sympathy on the passing of your dear Bernard. We know you have had a long and difficult time. Please know that our thoughts are with you and hopefully, all your fond memories will help you ease your pain. .

Terri And Eddy Isenberg - 23 days ago

Dear Cousin Pearl And Family, Our Deepest Sympathies on The Passing Of Your Dear Bernard, May The Fond Memories Help You Through these Difficult Times ,Terri And Eddy

To the Rubinstein family: I was very saddened to hear of Bernard’s passing. I have the fondest memories of the summers which our families shared at Lac Ouareau many years ago. As the current President of Temple Emanu-El-Beth Sholom, I thank Bernard for having served as President of Temple and for his commitment to our congregation. Please accept my condolences. Sincerely, Neil Wiener

Dear Pearl and family Our deepest sympathies on the passing of your beloved husband. Sandi &Norman

My sincere condolences to the Family of the late Bernard Rubenstrin.He was my father,the late David Goodman QC.’s insurance agent many years ago.My father passed away in 1971 and .Mr.Rubenstein was so thoughtful to our family during that stressful time. May he Rest In Peace.BDE Warmly,Franceen

Dearest Pearl and Rubinstein family, my deepest heartfelt condolences to all. I was very sad to hear of Bernard’s passing, he was indeed a great character and a hero. I enjoyed his stories vicariously through Howard. A tremendous loss to you, and to the community, he will be missed. Sending love and hope for healing. Sincerely, Crayne and family

Dear Pearl, We are so saddened to hear of Bernard’s passing. Being neighbours for the last 24 years, We will forever remember His cigar lofting in the air and a friendly hello whenever He was sitting outside making sure Our Finchley Road was being looked after. May Bernard’s memory be a forever lasting blessing to You and the entire family.

dear cousin pearl...i was very saddened to learn of the passing of your beloved husband bernard...whenever, i would meet him, he always greeted me with a smile, and kind words...he was a true mensch..i want to wish you and the entire family strength and courage during this very difficult time...may the wonderful memories of him inspire you and the entire family and give you all peace and comfort, and help you through many tomorrows..please accept my sincerest condolences and sympathy......herbert isenberg

Dear Pearl, Heartfelt condolences to you and the family on the passing of Bernard. He was a highly intelligent man who was successful in so many different endeavours in his lifetime. Pearl, you truly were a jewel in his life taking such good care of him right to the end. May good memories of your life together see you through your loss and may you and all who loved him have no more sorrow. Sending you hugs and thinking of you. Claire

Dear Pearl and Rubenstein Family. Please accept our deepest sympathy on the loss of Bernard. He was a very well known gentleman in the insurance business and the many years he spent as President of Temple Emanuel Beth Shalom. He was very devoted to his family and will be sorely missed. We spent many good times together. May your fond memories be a comfort to you to look back on at this very trying time. Ceil & Ron 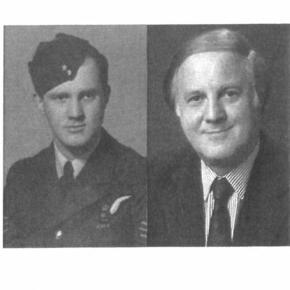 Born into the rough times of the 1920’s, Bernard succeeded. Upon graduation from high school, he volunteered for military service, joining the RCAF and serving as a Wireless Air Gunner (W.A.G.) for the period of 1942-1945. At demobilization, he attended and graduated from McGill University with a diploma in law. During his time at McGill, he continued his military service until he retired with the rank of Captain in the RCA (R), completing fifteen years of service to his country. He retained his strong love of country and was most proud of taking a stand against the evil that had consumed much of the world. Following graduation, he founded and operated his own insurance brokerage Bernard Rubenstein, Chartered Insurance Brokers, with offices in Canada, USA, and the UK.

Bernard was a straight-talking man who did not suffer fools lightly. In a crisis, he was unflappable and would speak the truth that some did not wish to hear. A skilled problem solver, he had the ability to reduce complex issues to a form that all could understand. With his ever-present cigar, he enjoyed his Montreal Canadiens and calls from or visits with his grandchildren. He never forgot the dogs and cats that had kept him company over the years, including his beloved Great Dane, Princess.  Bernard will be remembered as a man of character, honesty, strength, and compassion to those less fortunate.  Most importantly, he was very appreciative of the attentive care that his wife Pearl had given him. Donations in Bernard’s memory may be made to the Quebec Veteran’s Foundation, (514) 457-3440 or visit fqv-qvf.ca/support, or to the Montreal General Hospital Foundation, (514) 934-8230 or visit https://www.mghfoundation.com.