Dear Myra and family, my sincerest condolences on the passing of your beloved patriarch, Larry. May your blessed memories bring you comfort during this difficult time. Fondly, Bernie

Dear Myra and family my condolences on the loss of your father. May the memories of all the good times comfort you today and always.

To the Famiiy of the late Larry Spier, -Larry was a younger cousin of my late Mom, ( Molly Spier Bassior. Fondly remembering Larry, his siblings , Uncle Max and Aunt Rosie as a very young child. Heartfelt condolences- may the fond memories you have shared with him bring you comfort always.

Gerry, Reissa and Sheldon Please accept my sympathies on your loss. I wish you strength at this difficult time. Baruch dayan ha'emet Lewis Olishansky

Dear Spier Family. Please accept our deepest condolences on Larry’s passing. He will be missed by the club’s members and friends. May the families be spared any further sorrows and may He Rest In Peace.

Dear Nina, My condolences for your loss. If you remember, I came over a few times to help Larry with the computer. A true mench. Coincidentally, I then moved into your old building at 5505 Cavendish. Truly saddened to hear of his passing. BDH'

Dear Myra and family, My condolences on the loss of your dear father. May you be comforted by sharing wonderful memories with your family.

Dear Nina and family, very sorry to hear the news. Our sincere condolences on the loss of your husband, father, grandfather and great-grandfather. May the memories always be by your side and bring you consolation. Larry and Ethel

I am saddened to hear this news and my heart goes out to the family. He was a nice man who always made us feel welcome. I would like to think that he is playing bridge with my mother-in-law.

To Myra and family, we are very sorry for your loss. We think and talk often about your beautiful family. Lynn and Stan

Dear Nina, Myra, Phil and family I was a young girl when I soent a lot of time at the Spier house. Your dad was always so sweet Myra, and he always made me feel so welcome. My heart goes out to all of you during this difficult time.

To Nina, Stanley, Lily, Phyllis, and the entire Spier family - My deepest sympathy on the loss of your beloved husband, father, father-in-law, brother, brother-in-law, grandfather and great grandfather.

To Nina and the entire family, we wish to send our condolences. What a nice man. We saw them on many occasions and got to know them quite well. Larry had a good life, a long life, may his soul rest in peace. Sandy and Irving Itzcovitch

Dear Gerry, Reissa and the Spier family, My most sincere condolences on the passing of your dad. Losing a father is never easy but let your memories carry you through this time. Memories are the gold of life. May they blanket you with their warmth. May you be spared further sorrow. My thoughts are with you. Marianna Galfi

To dear Lil and the Susser families. We’re sending you our deepest condolences on the passing of Larry. May his memories always bring you comfort. Carmen & Jack Korin

Sabrina and Allan Adelman - 24 days ago

To all the Spier family our deepest condolences. Though not in contact often our families intersected in many ways over the years. May your fond memories sustain you in this hard time. Sabrina & Allan

Dear Nina, Myra, Phil and families. Larry was such a sweet guy. You are so lucky to have had him in your lives for so long but he will be missed. May his memory be a blessing.

Dear Nina, Lil, and family. Please accept my sincerest condolences on the passing of Larry. My thoughts are with you at this sad time. Reta

Rhoda and Peter Sternberg - 24 days ago

Dear Nina, Lil and family, Our heartfelt condolences on the loss of Larry, a very special person. May you know of no more sorrow. Rhoda and Peter

To Lillian, Nina & all family members,: I extend my sincere condolences on Larry's passing. I hope your memories of joyful times spent together bring you comfort. May you be spared further sorrow.

Dear Nina, Gerald, Reissa and families My condolences to all on the passing of Larry. I have a great memory of Larry giving Allen and I bridge lessons more than 25 years ago..what a patient teacher he was. I hope your collective memories will help comfort you during this difficult time.

Dear Nina, so sorry to hear of Larry’s passing. I remember well the dinners out with my parents. And that you were one of my mom’s longest time old friend. Our deepest sympathies.

Our sincere sympathy to the whole family. Love from Stephanie, Valérie, Solly and Moey Susser

To the Susser and Spier families, Norm and I want to offer you our deepest condolences at this tragic time.

Dear Nina, Sheldon, Gerald, Myra and family and my dear Mom, Lillian and Uncle Stanley and family. May Larry's fond memories live on forever in your heart. Our heartfeltcondolences. Love, Ellen&Rick&family

Dear Nina,Gerry,Reissa,grandchildren and great grandchildren I am so sorry to hear about your loss. I have fond memories of Larry as a Sociable and happy person especially when we met at family simchas.Your fond memories will be a source of comfort to the entire family. With love Hannah

Dearest Myra and Phil and families How fortunate to have your Dad and how sad to say good bye. they say that the longer we have the harder it is. Cherish all the wonderful memories and the good times and may your families be spared further sorrows. Thinking of you Gena Dworkin Ray

Debbie and Howard Cossever - 24 days ago

Dear Reissa and Gerald, with our sympathies on the loss of your dear father and father in law. May he find his eternal rest.

Donna and Eric Rodier - 24 days ago

Dear Nina, Reissa, Gerry, Devon, Deanna and the entire Spier family, We were saddened to hear of the loss of your beloved husband, father, father-in-law, grandfather and great- grandfather and send you our heartfelt condolences. We fondly remember Larry's presence at many family simchas and how proud he was of his family. May a lifetime of wonderful memories and the loving support of family and friends comfort you at this very sad time. With love, Donna and Eric

Dear Nina and Lil, My deepest sympathy on your recent loss. My thoughts are with you.

Please accept my deepest sympathy on the loss of your dear father, father-in-law, grandfather and great grandfather Larry Spier. May his precious memory be forever blessed with everything good. Big Hugs and lots of love.

To Lil Susser and Family, My deepest condolences on the passing of your dear brother Larry. Thinking of you and your family at this time. May his beloved memory be for a blessing. With heartfelt sympathy, Carol Deitcher and family

Myra and Phil - I am sorry to hear of the passing of your father / faher-in-law. Please accept my condolences.

Yossie, Roz and the entire Family Harvy and I are sending our deepest condolences on your recent loss of Larry. May you know of no more sorrow and may his memory be a blessing. We are thinking of you at this sad and difficult time. Risas & Harvy

Ruth and Moe Gerstein - 25 days ago

To the Susser and Spier family, Lil, so sorry to learn of your dear brother Larry passing. Our heartfelt sympathy to you and family. May you be spared further sorrow and he be a blessing for all. Ruth and Moe

Naomi and sol baum and family - 25 days ago

To the entire Spier family. Please accept our condolences on the passing of your dad. Hold,onto all the wonderful memories in your hearts each and every day..sincerely Naomi and Sol Baum and family 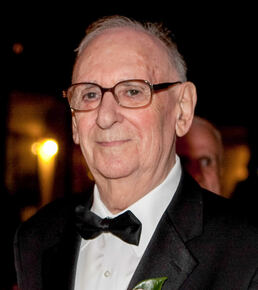 It is with great sadness that the family of Lawrence (Larry) Spier announces his passing on Saturday, January 1, 2022, at the age of ninety-eight. Devoted and beloved husband of Nina Pekar. They met on New Year’s Eve seventy-seven years ago and were married for an amazing seventy-five years. Larry was the son of the late Rose and the late Max Spier. Loving father and father-in-law of Sheldon Spier and Cheryl Cameron, Gerald and Reissa Spier, Myra and Phil Migicovsky. He was a dear brother and brother-in-law of Lillian and the late Sol Susser, Phyllis and Stanley Spier and brother-in-law of the late Jack Pekar, Joseph and Rozie Pekar, and Morty Pekar.  He will be dearly missed by his grandchildren and their spouses, Geoffrey Spier and Nara Santana, Michelle Spier, Devon Spier and Josh Lieblein, Deanna Spier; Jill Migicovsky and Sepehr Dehpour, Eric Migicovsky and Alex Migicovsky.  He was a proud great-grandfather of David Spier, Rebecca Spier, and Ariana Dehpour. Larry will be warmly and lovingly remembered by his many nieces, nephews, family, and friends for his kind, sensitive, sweet, and gentle personality. He was a Bridge Life Master and a World War II veteran with the Royal Canadian Air Force. The family would like to thank Larry’s exceptional and compassionate caregivers from CLSC René-Cassin, Yves, Alma, Mashid and Melissa. A private graveside service (by invitation only) will take place on Tuesday, January 4, 2022. Shiva private. Donations in Larry’s memory may be made to the Jewish General Hospital Foundation, (514) 340-8251, or visit https://jghfoundation.crowdchange.co/14038/page/335469 or to the Canadian Bridge Foundation, (416) 706-8550, or visit  https://www.cbf.ca/donations/#id=10179&cid=1042&wid=7201, or to the charity of your choice.