Dear Family of Erica, I was saddened to read of Erica’s passing…I had a great fondness for Erica …she and my late Mother, Anne Mayberger Blair, we’re very close friends during their time at Westmount One…she encouraged my Mom to participate in the Art Classes there which my Mom did at age 98 for the first time. May she RIP😔🙏😞

Dear Felicia and family, I was so saddened to hear of the passing of your mother. Erica was both intelligent and beautiful inside and out and her smile brought warmth and sunshine to any room she was in. Erica was my late mother Anne’s next-door neighbour at Westmount One and when I volunteered and created a gentle tai chi class for the seniors at the residence, Erica was the light that lit up the classroom. Felicia your devotion was exemplary and I know you meant as much to your mom as she did to you. May her memory bring you and your sister sunshine as you shone on her with all your visits and caring. May you carry her peace and joyfulness with you everywhere you go and know no more sadness. We were all blessed who knew Erica and thank you for sharing and taking such good care of your mom.

Dear Felicia, please accept my sincere condolences on the passing of your mother. I know that you were a very devoted daughter and may your memories of her be a blessing.

DEar Felicia, Arlene & Family, My deepest sympathy on the loss of your beloved mother. Erica was a gracious & beautiful lady. I first met Erica at a bridge club and from there we formed a friendship. I have many pleasant memories of evenings spent at our homes playing bridge & sharing newsworthy events. Her artistic talent was evident not only in her artwork but her manner of dress & her table settings. May her memory be a blessing.

Dear Arlene and Felicia My condolences on the passing of your mother. Seeing this news brought back memories, Arlene, of our high school days and time I spent with your family. I recall you were a close family and I hope that you have two sustain each other during this sad time with many wonderful memories of your mother.

Eric and I send our sincere condolences. I always admired your devotion to your mother.

Dear Arlene & Felicia, my deepest and sincerest condolences on the passing of your beautiful mother Erica. Your Mom was always so caring and loving towards me. Although reserved in her ways, I loved making her laugh....and I remember doing that many times just to see her gorgeous smile. I loved going to your home. Your Mom and Dad always made me feel welcome. May love and comfort surround you during this time. I am sending you both a very big hug.

Bonnie and JonHamovitch - 28 days ago

Dear Felicia, We were sad to hear of your mother's passing, We know how close you were to her, and we hope the many happy memories of the times you shared together will always be with you. Fondly. Bonnie and Jon

Dear Felicia & family, Our deepest condolences to you. Although we did not know your mother we know her through your love and stories. What a woman. Wishing you strength. Adele & David

Dear Travis Family,, Sincere condolences on the passing o Erica. As a former Quebecer I vividly remember you. ourMom very well. She was a dignified beautiful,classy lady. Being a small Jewish community she was active and involved with community activities. She was really a very nice lady.. May you find comfort in your fond memories and know no more sorrow.

Dearest Felicia, Arlene and family. I was one of the privileged people to have known and loved your beautiful mom and also your wonderful dad Willy. A stunning and elegant lady who literally lite up a room when she walked in. She introduced me to the value of community service and an appreciation of her artistic talent. I send sincerest condolences and share in your grief and sadness at her passing.

To the family of the late Erica Travis, On behalf of the staff and management of Israel Bonds, please accept our sincere condolences on the passing of Erica. Our thoughts are with you at this difficult time. May your memories be of comfort to you, and may you be spared further sorrow. With our deepest sympathy, Israel Bonds/Canada-Israel Securities, Ltd.

Dear Felicia. Erica will always hold a place in my heart. I met her when I rang her doorbell with my six month old daughter Deborah on my back, going door to door selling Avon. She invited me in and it began a friendship which lasted over many years. That’s how you started babysitting for Deb. Your love and loyalty are rarely seen anymore. Erica was definitely a woman with stately qualities. She is finally in the Presence of our Almighty and reunited with her beloved husband who I know adored her. She was a very brave woman and touched everyone she was with. My heart goes out to you who has suffered so much. May God’s shalom envelop you and strengthen you.

Felicia, Arlene and family, My deepest condolences on the passing of your mom and my heartfelt thoughts during this difficult time. Erica certainly left an impression on those she met. She was indeed extremely fortunate to have you Felicia by her side and with her daily with such unbounding love, dedication and devotion especially during her final years. May you find strength in the many happy memories, knowing you gave her it all and may you find new energy to replace what cannot be replaced. Stay strong during this difficult time. Renee and Fred

I am very sad. I wasn't able to sleep when I got the news last night. My love Erica has gone without saying good bye. I immediately thought of Felicia, I do not know how to help her overcome this tragedy. I also thought of Ditas who has been very devoted and assured her the best care possible with love and compassion to my sweety. May god bless Erica and keep her in paradise Felicia and Ditas you are the heros. You were at the top. You did everthing perfectly.. Ditas spent night nights wth Erica, leaving her family alone As to Felicia you are number 1. Felicia: youu are wondefull. You come every week end from Toronto to see our princess Erica. You followed all the appointments and made sure she is on time, You have paid for her and you have been very genereous with me. With time, you become my family., to the point where I take time off VanMedic and drive her and stay there to take her back. I miss you all......and Erica will longly be remembered.

Dear Felicia and Arlene, please accept my heartfelt condolences. Reading Erica’s obituary brought back a flood of memories from my childhood days. Our parents were very close friends. They were from a generation of resilient ,strong , amazing and fearless people. Your mother was beautiful and lit up a room. I wish you strength and peace during a most difficult and sad time.

Dear Felicia, my deepest sympathies on the passing of your beloved mother.I will always remember her warmth and compassion extended to all. My late mother adored her! May her memory be a blessing, long life to all. BDE Bill

Dear Felicia Please accept my deepest sympathies on the loss of your beloved mother. May her memory forever be a blessing

Dear Felicia and family, Our heartfelt condolences on the loss of your mother. What a warm, cultured and elegant lady. We very much enjoyed our conversations with her during Rosh ha-Shanah and Passover at Julie's. Felicia, your tireless, meticulous and creative devotion to her care is a profound and true expression of the love you shared. May her memory forever be a blessing.

Dear Felicia Avram joins me in sending our sympathies to you on the passing of your mother. I never had the privilege of getting to know her but her obituary is so complete and beautiful that it is easy to see how special she was . You were so very devoted to her and I am sure that you will have loving memories of wonderful times together. May her memory be a blessing to all who knew her and may you be strong in facing this difficult time.

Dear Felicia and family, Please accept my deepest condolences upon the passing of a most wonderful and warm person. I met and spoke with Erica on several occasions. She was always insightful and had a great sense of humour. She will be deeply missed by those who knew her. May her memory be a blessing. Michael Garonce

To our dearest Felicia, Arlene and Ryan, Erica has been part of our family for over 30 years and we have wonderful memories that we will cherish always. Our visits in Montreal and in Toronto were full of joy and laughter, special treats for the boys, scrabble marathons and tea parties. We will remember her beauty, grace, creativity and warmth, and cherish the love she had for our family, especially for Shoshanale (Donna). Felicia, your love, devotion and dedication for your mother was unending, unconditional and immeasurable. May her memory be for a blessing.

Dear Felicia, it has been many years since i've seen you, but the memories of your devotion and love for your Mom are quite vivid. What a legacy she leaves in having a daughter who was always by her side. I hope that time heals your broken heart. Kayla Schneiderman

Dear Felicia and family - we are saddened to hear of the death of your mother. We know the last few years have been challenging and she was fortunate to have been the recipient of your devotion and care. We met her only a few times but recall her as a vibrant, elegant, interested and interesting woman. We know her memory will be a blessing. Greg and Pam 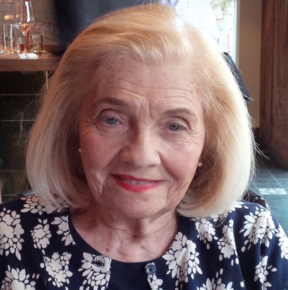 It is with great sadness that we announce Erica’s passing on Wednesday, December 29, 2021. Predeceased by her adoring husband William. Dearly beloved daughter of the late Sheva and the late Berl Brandes. Treasured mother and mother-in-law of Felicia and the late Sidney Valo, Arlene Travis and Ryan Stone. She will be dearly missed by her step-grandchildren Ilana Valo and Josh Silvertown, Shana and Michael Peiser, Michael and Rebecca Valo; and great-grandchildren Cydney, and Jack Silvertown; Jacob, and Isabelle Peiser; Judah, Cohen, and Sage Valo. She will be lovingly remembered by all who had the good fortune of knowing her. The family would like to thank her exceptional team of caregivers (TE) expertly headed by Ditas and fully supported by the wonderful and devoted care of Juby, Karen, Christina and Rona. A special debt of gratitude to Dr. Céline Laferrière for her compassionate and dedicated care.

After the war, Erica lived in Israel and was proudly there when it was declared a State. She spent her life volunteering and supporting the Jewish communities in Quebec City and Montreal. Erica was a very talented artist who loved music and the arts. She loved her family dearly and was very protective of them. Erica’s wit, astuteness, and intelligence were defining qualities which truly set her apart.
A private graveside service will take place. Shiva strictly private in Toronto. Contributions in her memory may be made to the Heart & Stroke Foundation of Quebec (800) 567-8563 or to the charity of your choice.

”Elegant, creative, progressive, and a fiercely independent woman whose beautiful smile lit up a room”