Dear Bertha and family, please accept our deepest condolences on the passing of dear victor . We shared happy and joyful events together. May his memories be a source of strength to you. My G d comfort you among the mourners of Zion and Jerusalem. Elana & Ezra Cohen.

Dear Berta Abby Morris and family Our sincere condolences on the passing of dear Victor He and Berta were good friends to my parents and we will always remember him fondly. May he Rest In Peace. Mazal and Solly Abdulezer

A very friendly, kind, gentleman ,Always warm and welcoming. Please accept my sincere sympathies and wishing you only happy memories at this time and in years to come .

Dear Abby, Ben joins me in extending our condolences to you, your mother and family. Your father’s life reads like a legend. Your devotion to your parents has been exceptional, With warm memories of your dad poolside reading and playing bridge, sincerely, Susan and Ben

Dear Berta, Abby, Morris & Family, We are so sorry to hear about your loss. Victor was a kind, warm, and pleasant man and our families enjoyed many wonderful times together. We will always remember Victor with fondness. Best wishes to you all.

Dear Aunty Bertha, Abby and Morris. We are so saddened by the passing of Uncle Victor. I remember the kindness that I received when I was working in Montreal and the warmth and joy that was your home. May his memory be for a blessing. Love, Yvette

Dear ‘Aunty’ Bertha, Morris and Abby and Family, I’m so sorry to hear this news and the passing of Victor. I’m deeply sorry for your loss. You have my heartfelt and warm condolences. I appreciated that Victor had a good-natured sweet, loving, and gentle soul with a warm laugh and a kind sense of humor. He was a great friend to my parents and I’m indebted to the wealth of good, fun memory he brought to their lives, to my family’s, and the gentle and caring sensitivity he brought to mine. I have this wonderfully vivid happy memory of Victor exiting to his garden or already in action watering his lawn and always stopping to wave in friendliness and with a kind smile to me as a youngster playing in my front yard across the street. His cheerful, sincere hello and kind presence added lots of meaningful warmth to my childhood days. Victor was a sweet and real gentleman in the truest sense to anyone on any day. I also vividly recall his love of singing to Om Kalthum at my Bat Mitzvah “chaldri” and his enjoyment of all the music through to the early morning hours. To watch him respond to the melody and words helped me more deeply appreciate the profound sentiment and loving kindliness of a song. The music raptured his face and he made it sentient that something in his heart transported to a sweet, rich, sacred, special, loving, beautifully eternal and understanding space. May his peaceful good be for a blessing and may his strong, good love in you be an inexhaustible source of comfort, appreciation, and pride. I wish you and all in your family comfort, strength, ease, and much love at this difficult time.

Yael and Eddy Shahin - 30 days ago

Dear Bertha, Morris, and Abby, we are sorry to hear the news of the passing of dear Victor. He leaves us with many years of memories of smiles and dear friendship to my family. May the memories continue to be for you a source of strength.

My deepest condolences to the family. We’re sad to see Jonathan not being mentioned in the obituary.

Liliane and Elie Levy - 30 days ago

Dear Shawn family, Victor was a kind and most thoughtful person, respected, admired, and appreciated by all who had the privilege of knowing him. Our deepest sympathies. May you be comforted by the special memories that fill your hearts and may you be spared further sorrow. BDE

Gladys and Jack Noonoo - 30 days ago

Dear Bertha and family we were neighbours in Montreal and even in Florida. Victor was always pleasant and very nice, we had many good times together he will be missed may his good memory be a blessing to all of you. Gladys Jack

Debbie and Gilles Mosseri - 30 days ago

Dear Berta, Morris, Abby and Family, Our sincere condolences on the passing of your dear Victor. He and Berta were dear friends of my parents for many years and I will always remember him with fondness. Our prayers are with you, Debbie and Gilles Mosseri

Dear Bertha, Morris, Abby and Family, We are very sad to hear of the passing of Dear Victor. We shared many wonderful years together.May his memory always be a source of strength to you. please accept our warm condolences, Evette and Morris

Joyce and Mounir Peress - 30 days ago

Dear Bertha, Morris, Abby and Families We extend our deepest condolences for the passing of Victor. He was a gentleman with a subtle sense of humour, May his good memory be a blessing to the family.

Grace Shawn Robin - about 1 month ago

Dear Aunty Bertha, Abby and Morris, My heart goes out to you on the passing of dear Uncle Victor. He was a very important part of our wonderful family. I’m so grateful that my sisters Yvette and Joy and I visited with you all in Montreal. Uncle Victor was such an intelligent, warm and gentle man. He will be greatly missed. Sending love to all of you at this painful time. Love Grace Shawn Robin

george albert saleh - about 1 month ago

Our deepest condolences to Berta, Abbey, Morris. We were saddened to hear about your loss. Victor was a wonderful man. May he rest in peace. Yvonne and George Saleh

Linda Mashaal - about 1 month ago

Dear Berta, Morris, Abby and Family, I am so sorry to hear about the passing of Victor. He was a sweet gentle man. My sincere condolences. Linda

Allan Gourdji - about 1 month ago

Dear "Auntie" Bertha (you were all "aunts" to our generation), Abby, and Morris, My sincere condolences on your loss. Victor was as sweet and kind a man as you could meet and a great friend to my parents. I know you will cherish his memory.

Rebecca and Frank Daniel - about 1 month ago

Michele Shahrabani - about 1 month ago

Dear Berta and family, I am very sorry to hear the news of Victor ‘s passing. I always knew him as a true and kind gentleman. He will be missed. Please accept my sincere condolences .

Lily yousfan - about 1 month ago

Dear Bertha Morris and Abby . So sorry to hear the sad news of Victor passing. My sincere condolences. Victor was a special kind man may he Rest In Peace

Pauline Zoldan - about 1 month ago

Dear Shawn Family, During my time working at S&P, Victor was always a gentleman with class and so very well respected. My sincere condolences

Gladys Mooallem - about 1 month ago

Dear Bertha, With great sorrow I received the news of the passing of our beloved Victor. I knew him from Lord Reading Yacht Club when almost all our Iraqui Jewish Community were members there. Our children played Tennis, and learned sailing, our men played Bagamon we played Bridge and enjoyed the pool and relaxing by the lake. Of course we enjoyed the dining room and all the parties. Alas, we are loosing all that generation one by one. Victor was loved by everyone with his warm loving approach to everyone. We enjoyed several parties at their house socially and through the sisterhood. He was very special. My deep condolences to Bertha and the whole family.

Michael Litwin - about 1 month ago

I knew Victor when he lived in Montreal. What a wonderful gentleman. Always a pleasure to chat with him. A real family man.

Shlomo Avivi - about 1 month ago 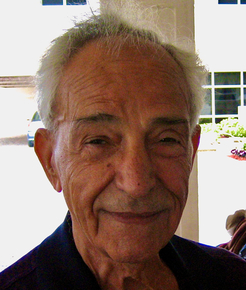 On Friday evening, November 5 at Mount Sinai Hospital, we lost our beloved husband, father, grandfather, brother, brother-in-law, uncle and friend, when he peacefully passed away in his 96th year.

Victor was married to his beloved Albertine (Tina to him and Bertha to everyone else) for 65 years, and was the deeply loved father of his children the late Ouri, Morris (Lili), and Abby (the late David Shiller). He was a beloved and playful grandfather to Daniel, Zack and Gabriella. The youngest of seven children, Victor was predeceased by his brothers Edward (Eliza) and William (Evelyn), and his sisters Victoria (Haron), Marcelle (Naji), Violette (Anwar) and Doris (Reuben), and will be fondly remembered by his many nieces and nephews.

Victor travelled a long and eventful road from his childhood in Baghdad, starting with an escape over the mountainous Iraq-Iran border, as a teenager and without his family, when his Haganah activities were discovered by the police. After a few months in Tehran he finally made it to Israel, working in construction, joining the army and marrying Tina, who was the sister of childhood friends from Bagdad. They bore their first son, Ouri, a beautiful boy who was tragically stricken with cancer as a young child. It was a difficult and sparse life in what was then a poor country, and in 1958 they moved to Vancouver where Victor's brother Edward was living, in search of a better life and better medical care.

They left for Montreal after Ouri passed, where they joined a thriving, active and fun-loving Iraqi-Jewish community, and it was there that Morris and Abby were born. Victor found work in the clothing industry, and he and Tina spared nothing for their kids. Their social life included lots of get-togethers with an extended circle of friends, often playing rummy late into the night, and frequent parties filled with Arabic music and dancing. Nothing could transport Victor more than the voice and music of his favourite singer, Om Khalthoum. In the 1970's the community helped rescue the financially distressed Lord Reading Yacht Club in Beaconsfield, cutting a deal and joining en masse despite the fact that none of them was a Lord nor owned a boat. The Lord Reading soon became the hub of their social life, the manicured riverside lawns filled with boisterous laughter, card games, backgammon matches, and the smells of Iraqi food wafting through the air.

In later years they began to travel more frequently, sometimes with Tina's brother Fred and his wife Ronnie on extended road trips through Europe, or to Italy with daughter Abby and her partner David. Victor loved to travel, to experience new things, to crack a joke with the waiter. In 2017 he and Tina moved to Toronto along with Abby, David and Daniel, with whom he had a special and very close relationship, and were reunited there with Morris, Lili, Zack and Gabriella, the whole family together in the same city for the first time in almost 40 years, and Zack and Gabriella getting the gift of precious time with their grandparents.

Victor was a quiet, gentle and laid-back presence. His sly sense of humour lasted to the very end, when he scolded a nurse for calling him Mr. Shawn, saying that it is his father's name and to call him Victor. He was a friend to everyone, a favourite of many, and he will be deeply missed by us all.

Donations in his memory may be made to Mount Sinai Hospital through the Sinai Health Foundation at 416-586-8203 or supportsinai.ca.

Leave a condolence for Victor Shawn